Popular culture in the United States has made the already iconic brownstone house even more famous. You can find these beautiful homes and their quintessential stoops featured in everything from television’s Sesame Street and Sex in the City to movies like Moonstruck, Breakfast at Tiffany’s, and more.

While brownstones are common in New York City and their many boroughs such as Brooklyn, they can be also found all over other Northeastern cities like Boston, Baltimore, Philadelphia, Washington D.C., and further into the Midwest. So what makes a house a brownstone? Why are these properties so desirable? And what are the pros and cons of living in a brownstone house? Read on to find out more. 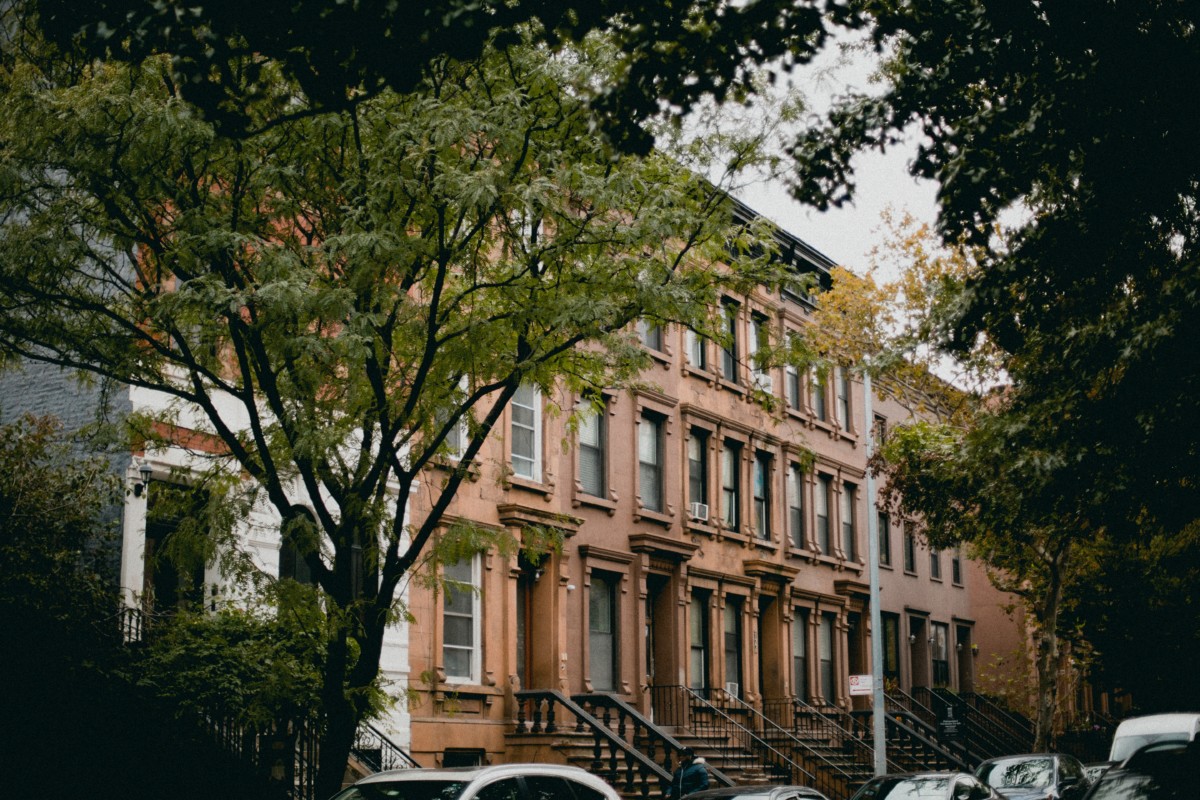 History of the brownstone house

The brownstone house was initially made from brick with a brown sandstone facade. The sandstone was quarried in Maine, Connecticut, New Jersey, Pennsylvania, and Wisconsin and typically transported on the Great Lakes and down major rivers by barge. Brownstone was a popular building material from the late 1700s into the 1800s as it was a more affordable alternative to popular building materials like limestone, granite, and marble.

Due to the cost and fire resistance, brownstone became popular as a building material in New York City in the 19th century. In an 1880 federal building census tally, 78% of stone buildings in New York used brownstone in their construction. New York City’s Upper West Side, Park Slope, and Brooklyn Heights have some of the largest concentrations of brownstones today. Initially, these four- or five-story buildings housed an entire family, most of which were not divided into apartments.

With the permanent closure of the Portland Brownstone Quarry in 2012, the building material has become scarce, driving up the cost and value of brownstone houses. As a result, brownstones have become a symbol of wealth as many of the remaining homes are over 100 years old.

Characteristics of a brownstone house

An actual brownstone house is constructed from brick with a brown, red, or tan sandstone. The facade has ornate details, elaborate moldings, pediments, and carvings in the rock and was typically built with three to six floors and 14-foot-tall ceilings. Initially, the homes ranged between 4,000 and 6,000 square feet. They are side by side, with no space between their sided walls, which is why they get confused with townhouses and row houses.

Most brownstone houses have large stoops, with stairs bringing homeowners and visitors into a sitting area outside the front door or the parlor floor. This design provided areas for neighbors to congregate instead of along roadways or sidewalks.

The floor below the parlor floor is the garden level (where the kitchen may be located) and the basement is beneath. The bedrooms are typically on the two to three floors above the parlor.

Brownstone homes are known for their open bay windows and rounded nooks. These design elements were for reading areas, sitting rooms, or a kitchen table. Real estate developers have split many brownstones into separate units, and each floor may be sold off as its own unit or home.

There are nine types of brownstone houses. Each one varies in the number of floors and ornamentation over the windows, doors, roofline, and stoops.

The oldest style of New York City brownstones is the Federal. Only brownstones built between 1785 and 1830 are true Federals. They are relatively plain houses with the elegance coming from the linear placement of the arched doors and windows on each floor. The Federal brownstone generally has two or three stories with a basement and a half attic with dormer windows.

The Greek Revival brownstone was inspired by classical Greek architecture, often used on homes built between 1830 and 1850. This style was more monumental than the Federal style with higher ceilings, and instead of a pitched roof and dormers, it has an entire third floor. The focal point is the parlor-window balcony rail and ornamental ironworks. These brownstones don’t have arches for the windows and doors and are generally three to three and a half stories.

The most prominent New York City brownstone style is the Italianate style, built during the 1850s. The Italianate brownstone has large protruding stoops, ornamented doorways, and heavy cornices. This style is typically two to four stories high and uses a darker brownstone for the door and window frames.

The Neo-Grec style has sharp, angular lines and classic details and gained popularity around 1865. This brownstone style has a protruding cornice resting on rectangular brackets and the entire window frame is rectangular, along with the massive door hood. Neo-Grec brownstones usually have a high stoop with large, heavy, angular, cast-iron handrails, fence, and newels.

The Second Empire style gained popularity in the 1860s with the new mansard roof style. Architecturally, it is almost identical to the Italianate style, even down to their floor plans. Generally, the Second Empire brownstones have ornate curved windows and a slate roof.

Queen Anne-style brownstones were constructed between 1870 and 1890. They have gabled roofs with dormer windows and a chimney. This style includes a variety of textures,  colors,, and decorative patterns. Terra cotta was used as ornamentation, and this style had a mix of window sizes, angled stoops, and painted railings. Due to its asymmetrical and eclectic details, Queen Anne is the most ornate type of brownstone house.

Romanesque Revival-style brownstones were built between 1880 and 1890. The style is associated with comfort and durability with heavy stonework and massive forms. The main feature of the Romanesque Revival style is prominent, chunky semi-circular arches, often in a different color and material which stands out from the facade. The style includes Spanish tile roofs, stained glass transoms, and Byzantine-style ornamentation.

The pros and cons of a brownstone house

Today, the cost of living in brownstone homes can outweigh the nostalgia of the building style. However, their charm and character still entice many homebuyers and renters. Here are a few of the pros and cons to consider when looking for a brownstone house.

Pros of living in a brownstone

Brownstones feature classic and charming décor, spacious stoops, and usually large windows. Their neighborhoods also often have a welcoming feel. You may also have more space and a garden if you live on the parlor floor, which may increase the value of the home.

Cons of living in a brownstone

However, there is a lack of modern amenities and due to their age, they may have plumbing, heating, and insect issues. Brownstones are almost always walk-ups meaning there is no elevator and they often have narrow stairs. Additionally, the cost of purchasing and restoring brownstones is high, due to the scarcity and lack of raw materials. 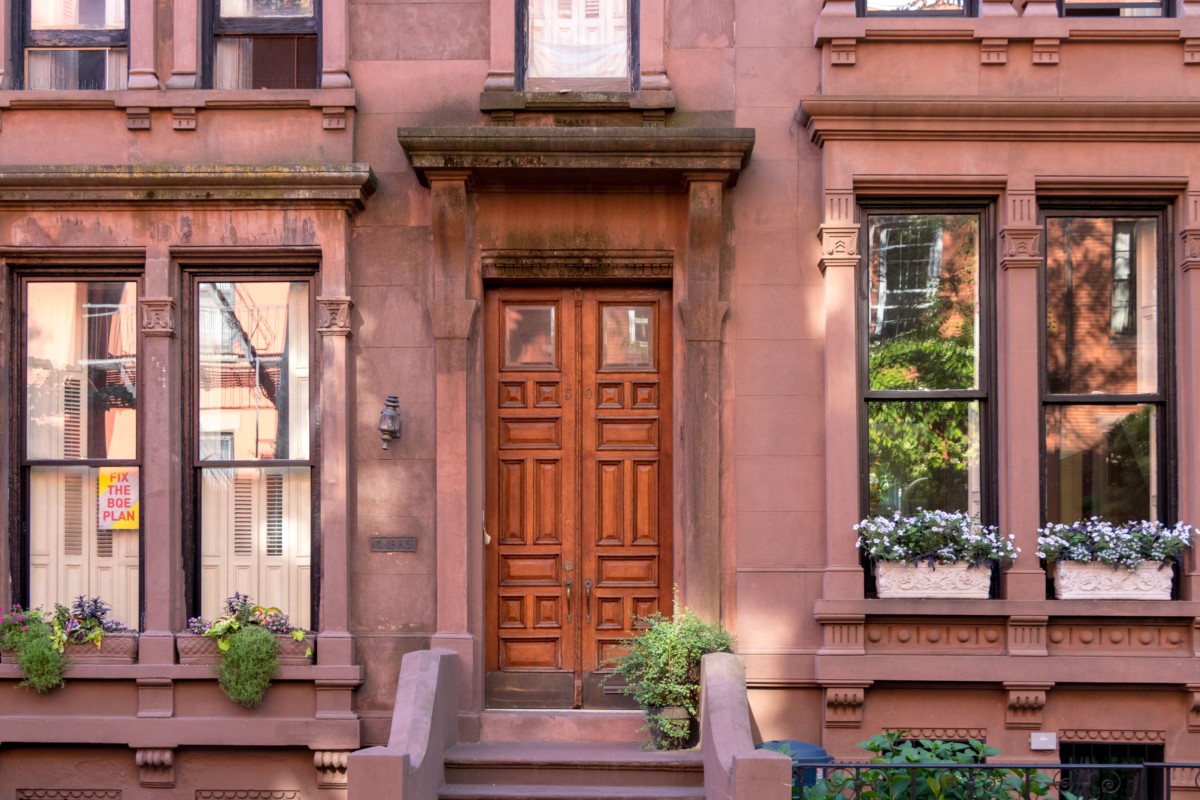 5 tips for decorating and highlighting features in your brownstone

Brownstones have amazing characteristics that can be restored and incorporated into modern designs. We reached out to experts for their best advice on designing a brownstone house, tips for highlighting classic features, and ways to use the space.

How to find a brownstone house if you’re looking

If a brownstone house suits your style, Redfin can help you find one in your area. It’s as simple as: