People moving in from expensive cities and locals with changing needs are contributing to rising home prices and fast sales even as the tourism industry takes the brunt of the pandemic’s economic impact.

Meanwhile, the unemployment rate in the Las Vegas area—where much of the economy depends on the tourism industry, heavily impacted by the coronavirus pandemic—stood at 16.4% in July (the most recent data available). That’s an improvement from 30% in April, but higher than the 10.2% national rate posted in July.

“A lot of sellers are asking me the same question: How is my neighbor’s house going under contract in two days, but I pick up the local newspaper and it’s all doom and gloom for the economy?” said Las Vegas Redfin agent Shay Stein. “It’s because there’s so much more demand than supply, driven by two groups:  People coming from high-priced places like California, Hawaii and New York who can suddenly work from home, and locals whose needs have changed due to the pandemic.”

In the second quarter of 2020, 46.3% of Redfin.com users searching for homes in the Las Vegas area were from out of state, making it the third most popular destination for people looking to move to a different part of the country. Las Vegas is perennially popular for people moving away from expensive parts of the country.

Just over 35% of out-of-state searches in the second quarter came from Los Angeles, making it the most popular origin for potential homebuyers looking to move to Las Vegas from out of state. Four other costly West Coast metros round out the top five: The San Francisco Bay Area (12.2%), Portland, OR (7.7%), Seattle (6.6%) and San Diego (4.6%).

Las Vegas Redfin agent Patrick Thomas said more than half of his clients so far this year have relocated to the area from other states, including California, Washington, New Jersey and Arizona. “While Las Vegas has suffered from an employment standpoint,  the pandemic has solidified people’s decisions to leave expensive urban areas,” Thomas said. “I helped a New York couple who sold their home for $1.9 million, bought a larger home here for $475,000 and pocketed the remaining equity. Plus, their property taxes went from $23,000 per year to $2,500.”

Laura Salgues, a Los Angeles Redfin agent, is helping a couple sell their coastal home to move to Las Vegas. “They’re under contract to buy a $1.2 million home in a high-end gated community in a Las Vegas suburb and selling their $4 million house in Los Angeles because they’re both able to work from home,” Salgues said. “The Las Vegas property is bigger and they’re able to save a big chunk of their income while living in a much more affordable area.”

Las Vegas Redfin agents agree that while migrants are propping up the housing market, there is a subset of locals who are buying and selling homes, made up mostly of people with changing needs and those working in industries such as tech, healthcare and education.

“The pandemic has been a driving force for the locals who are buying and selling homes,” Stein said. “People who are working remotely need offices to work from home, and some of them need more space for children to do schoolwork or additional bedrooms for grandparents moving in with adult children. I’ve also seen several people take early retirement and buy their dream ‘forever’ home.”

Marco Di Pasqualucci, another Redfin agent in Las Vegas, said that while about 80% of his homebuying clients are coming from a different state, he is working with locals who bought homes in Las Vegas when the market was cool and have built up enough equity to purchase a bigger property, and others who have lost their jobs are moving to a smaller, less expensive home. Low mortgage rates are motivating both groups  to buy sooner rather than later.

Looking ahead: Changes in eviction policies and migration could impact the Las Vegas housing market, politics

Stein said the expiration of the eviction moratorium, scheduled for the end of the year, could bring more inventory in 2021, which would help reverse the current double-digit supply decline. “Once the moratorium ends, the market may change as landlords who have a bad taste in their mouth put their properties up for sale,” Stein said. “I’ve spoken to several investors who can’t sell right now because they have tenant-occupied properties, and some of those tenants aren’t paying. They’ll sell as soon as they can, and that push could be the next big thing that changes supply and demand.”

Thomas said he believes the pandemic-driven migration from highly populated, expensive urban areas could change the economy and political makeup of Nevada, which is somewhat of a swing state.  “The number of people moving into the area will diversify the employment base so it’s less dependent on tourism,” he said. “The wave of migration could also impact the area’s politics. Some of the people coming from big coastal cities are fleeing liberal business and tax policies for a place more in line with their views, and some are strict Democrats who are moving for other reasons. It will be interesting to see if it results in a more conservative or a more liberal Nevada.” 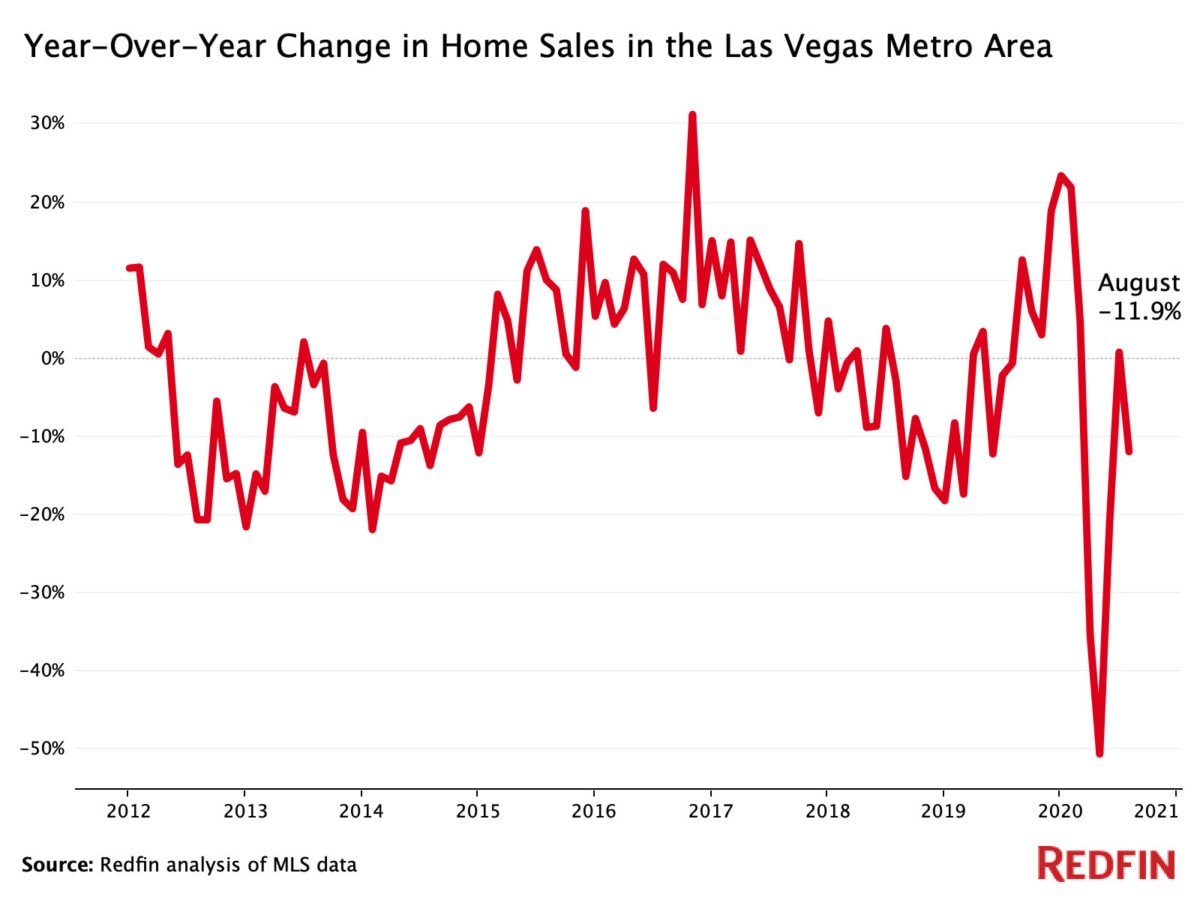 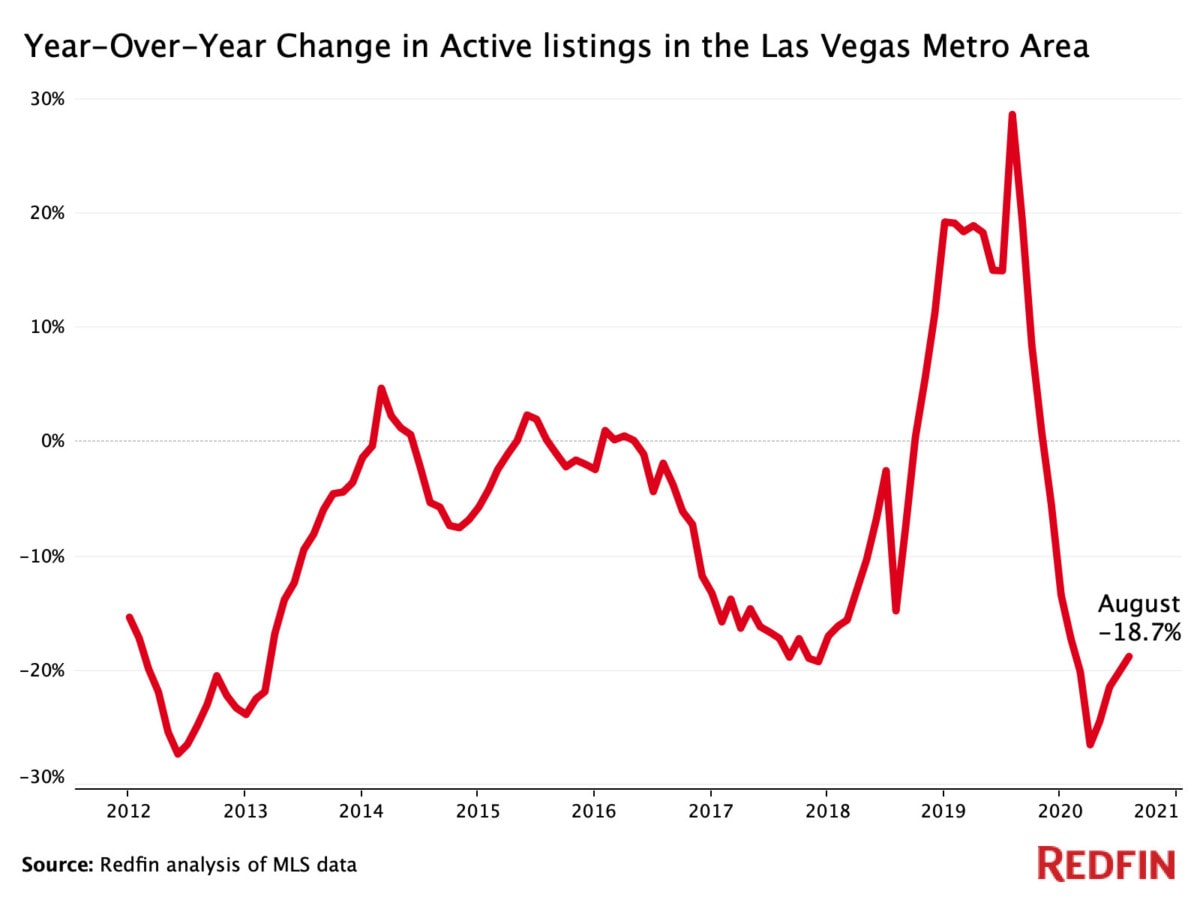 The typical home that sold in August went under contract in 45 days, 6 fewer days than the year before. Just about 20% of homes sold for above their asking price, an increase of 5.4 percentage points from last year.