The U.S. housing market was unseasonably strong during the four-week period ending July 12. Listing prices were up 13% year over year to an all-time high of $328,500. Closed sale prices, which lag listing prices, were also up 6%. Home prices are turning in monthly gains at a time of year when prices normally start heading down because people shift their focus from buying and selling homes to vacations and preparing for the start of school. 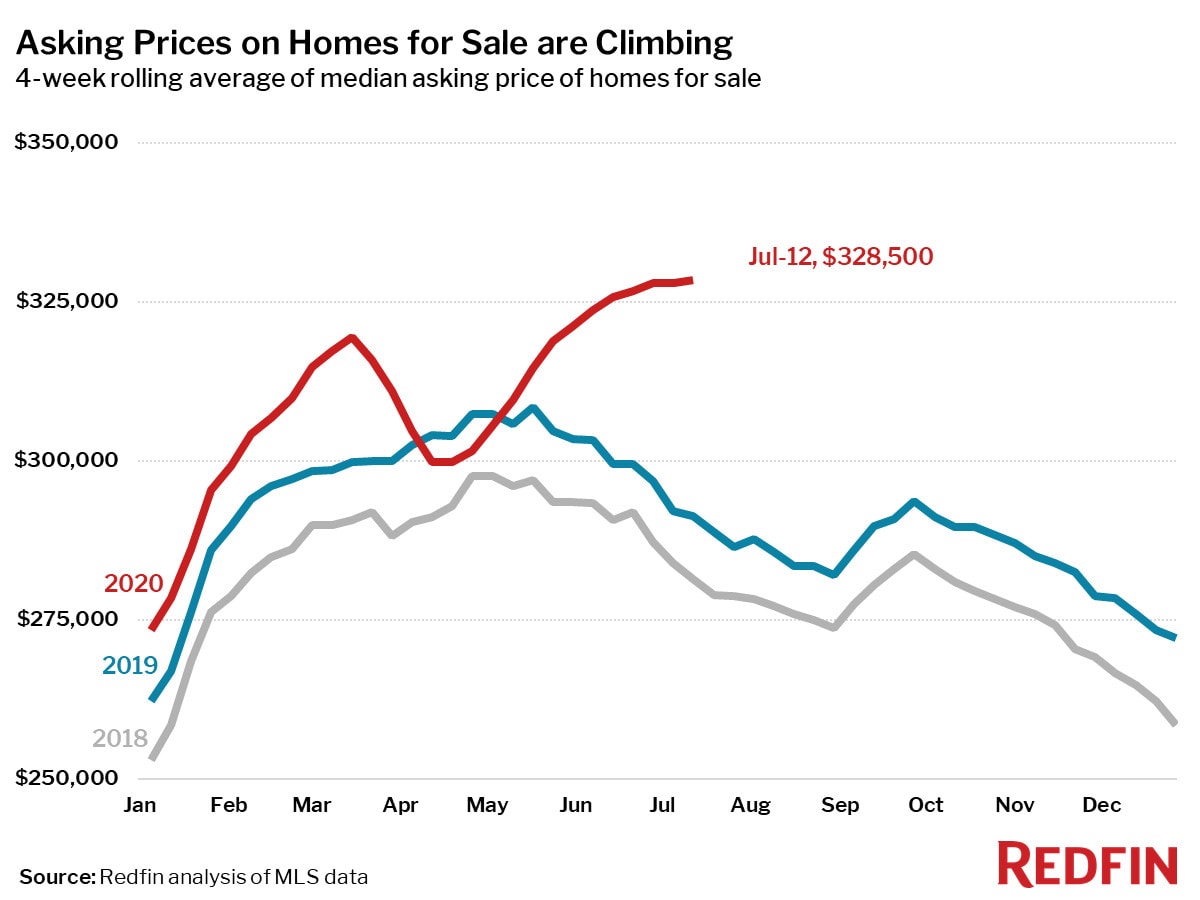 Buyers’ offers are coming up to meet sellers’ rising price expectations. Sale-to-list price ratios, which measure the difference between the final sale price and the asking price, are also climbing, to an average 98.8%, up 0.2 percentage points from the same period in 2019. And for the one-week period ending July 12, the ratio hit an all-time high of 99.0%. During the same one-week period, the share of active listings with a price drop hit an all-time low of 34.4%.

The number of home tours taken by North American buyers was up 12%, the Redfin homebuyer demand index was up 33% and pending sales climbed 7% from the same period in 2019.

“The housing market usually slows down in July and August when people take time off for vacations,” said Washington, D.C. area Redfin agent Kris Paolini. “This year though, a lot of vacations have been cancelled, and buyers who had previously given up their search are being lured back by low mortgage rates. The market has stayed hot through the summer and it doesn’t look like we’ll see the typical slowdown in August, either.”

So far, the housing market has continued to strengthen despite increasing coronavirus cases causing some large states like California to issue new shutdown orders. In Miami, where coronavirus cases are surging, “not much has changed,” according to local Redfin agent Carlos Mahone. “Since the initial lockdown ended, buyers have been much less fearful and are operating like they did before–including wanting to walk through homes with an agent, often after seeing the home first via a video-chat tour.”

As more employers embrace remote work, some homebuyers are reconsidering where they want to live; relocations are fueling a hot housing market in relatively affordable places. “People have realized they can work from home long-term, which has been a boon to Tucson,” said Tucson Redfin agent Kristi Penrod. “I’m getting four or five calls a week from people in the Bay Area, Seattle, Denver and Virginia, who have realized they can make a downshift in their lives and cash out of those expensive markets. This shift has really helped to create this insane market we’re in right now.”

Unfortunately for homebuyers, the number of new homes for sale continues to lag behind 2019. For the four-week period ending July 12, 5% fewer new listings hit the market than the same period a year earlier and the total number of homes for sale was down 28%, further exacerbating the imbalance between supply and demand.

“Listings have started to trickle up, but it’s still slow,” said Detroit Redfin agent Tony Orlando. “Homeowners have been very hesitant to list their homes for sale because they had assumed that the pandemic would hurt homebuying demand and depress values. They’re beginning to see how hot the market really is, but it’s a slow process.”

Facing fierce competition, buyers pull out all the stops

With so much competition for so few homes, homebuyers are employing dramatic measures to make their offers stand out in bidding wars. One of the most effective strategies, according to Redfin agents, is to offer free rent back to the sellers, sometimes for months past the date that the sale closes. A rent-back agreement allows the seller to stay in the house for a period of time after the sale to the new buyer closes, typically to give the seller extra time to find a new home. In a recent survey of about 400 Redfin agents, about one in 10 mentioned that their clients had used this tactic to win a home.

Some homebuyers are employing even more unusual strategies to win bidding wars, like adopting the seller’s pet chickens, attaching a letter to connect with the seller’s love of jam, and tossing in a jacket signed by the local NHL team; whatever it takes to get an edge.