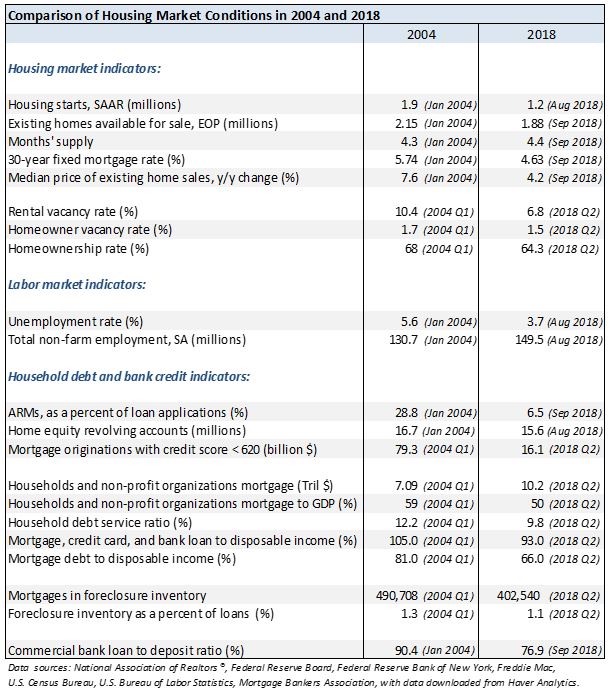 What are the key takeaways from these indicators?

First, housing supply is tighter. Supply conditions are tighter today than they were in 2004. In January 2004, there were 1.9 million housing units under construction, or 700 thousand more housing starts compared to August 2018. With more new construction, there were 2.15 million existing homes available for sale at the end January 2004 compared to only 1.88 as of August 2018. The inventory was sufficient to fill the demand for approximately four months in both 2001 and 2018, but the inventory of homes for sale in 2001 started to rise steeply so that by April 2008, there was enough inventory to meet 11 months of demand. With more new construction at that time, the rental vacancy rate was 10.4 percent in the first quarter of 2004 compared to 6.8 percent in the second quarter of 2018.

Second, households were more indebted and credit quality was lower, making them more vulnerable to rising interest rates and depreciating home prices.  Mortgage debt accounted for 81 percent of disposable income in the first quarter of 2004 compared to only 66 percent in 2018. As a percent of gross domestic product, the mortgage debt of households and non-profit organizations was equivalent to 59 percent of gross domestic product in the first quarter of 2004, which is higher than the 50 percent figure in the second quarter of 2018. In January 2004, 90 percent of deposits was lent out as commercial loans, compared to only 77 percent as of September 2018.  The lower level of debt means that any increase in payment defaults in 2018 will not be amplified as much throughout the financial system and the economy than what did occur during the housing and financial market meltdown in 2008-2010.

Adjustable rate mortgages accounted for nearly 30 percent of loan applications in January 2004. Borrowers thought or were made to believe that they could refinance these ARMs under the expectation of rising home prices, but the hoped-for price appreciation did not materialize, leading to a wave of defaults and foreclosures as mortgage rates started rising and home prices started falling instead. In September 2018, ARMs accounted for only seven percent of loan applications. The low share of ARMS is in part due to the low interest rate environment since 2009 under a relaxed monetary policy to spur and sustain the economic recovery.

Credit availability has tightened in the aftermath of the 2008-2010 housing recession, with credit mainly accessed by those with higher credit scores. Mortgage originations to borrowers with less than 620 FICO scores has shrunk from $79.3 billion in the first quarter of 2004 to $16.1 billion in the second quarter of 2018.  Today, there are 1.1 million fewer households with home equity revolving accounts. The higher quality of credit—although at the expense of tighter credit conditions—makes it less likely for a wave of foreclosures to occur in 2018 in the same magnitude as in 2004 that would then lead to the steep price depreciation that occurred during 2005 through 2012.

Third, the economy is stronger now than it is in the 2004 when interest rates started rising and home prices started falling as foreclosures rose. The unemployment rate stood at 3.7 percent in August 2018, the lowest since 1969 when the unemployment rate averaged 3.5 percent. The housing market’s downturn and credit freeze brought down the economy in the Great Recession, so with the less likelihood of a severe housing market downturn and financial crash, the economy is at a healthier footing in 2018 than in 2004.

Given the current economic, housing market, and credit conditions, it seems unlikely that prices will fall as steeply as they did during 2005 through 2012. To date, median sales price of existing homes sold has increased on a year-over-year basis for 79 consecutive months since March 2012.  However, prices are appreciating at a slower pace compared to past months because  the rising interest rates are making homes less affordable given the current level of home prices. As of September 2018, existing homes typically sold at $258,100 in September 2018, a 4.2 percent gain from one year ago. Most metro areas continue to experience price appreciations, although at a more subdued pace. According to Realtor.com listing data in September 2018, 412 out of 500 metros had year-over-year gains in the median listing prices, although fewer compared to 430 metros one year ago.  Among the large metro areas that had year-over-year declines in median list prices on Realtor.com were Denver (-9.5%), Dallas-Fort Worth-Arlington (-0.7%), and Austin-Round Rock (-3.4%). 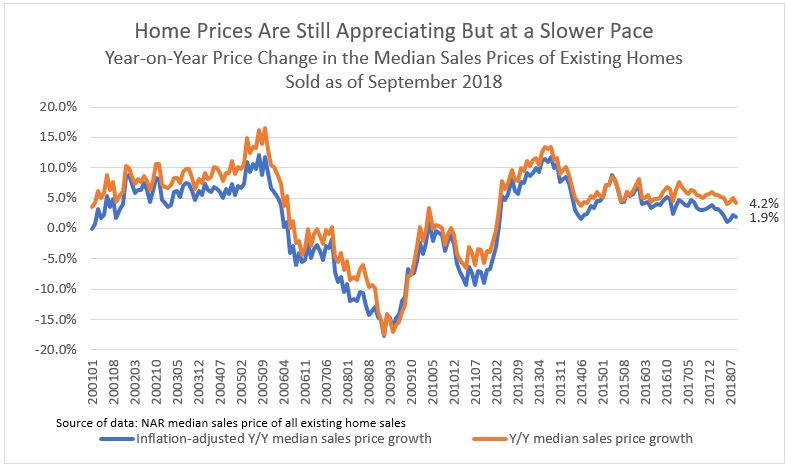 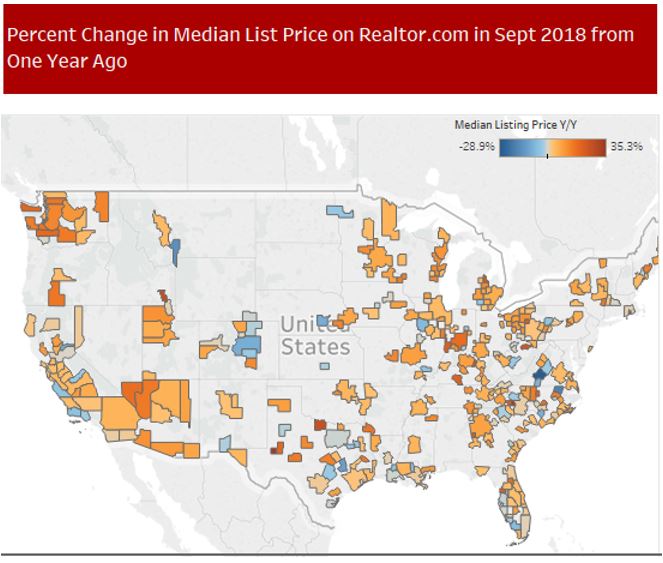 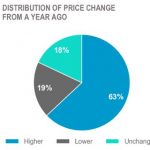 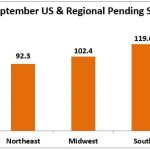