Milwaukee, San Francisco and Detroit Top the List of Places Where Black Homebuyers Are More Likely to Be Denied a Home Loan

Nationwide, 1 in 6 Black mortgage applicants is turned away when applying for a mortgage, compared with 1 in 14 white applicants. The gap is even wider in the most segregated parts of the country. Banks most frequently cite debt and credit history when denying Black applicants, but bias in lending also plays a role.

Nationwide, 15.9% of Black Americans who apply for mortgages are rejected, compared with just 7% of white Americans. The gap is widest in Milwaukee, San Francisco, Detroit, Chicago and St. Louis, where denial rates for Black homebuyers are more than 10 percentage points higher than they are for white homebuyers. In Milwaukee and San Francisco, specifically, Black loan seekers are more than three times as likely to be denied a mortgage.

“Getting denied a loan serves a huge blow to a person’s self esteem—especially for people of color, who often feel like the world is already falling on them,” said Brittani Walker, a Redfin agent in Chicago. “My mother has been a renter since she moved out of her parents’ house. I tried to get her pre-approved for a mortgage a couple of years ago, but she was rejected because she had some blemishes on her credit. She broke down in tears and hasn’t tried again since. When people of color are stuck in this cycle of renting, their children often meet the same fate, missing out on thousands of dollars worth of home equity. If your parents never owned a home, where do you learn the value of homeownership?”

Overall, Americans today are half as likely to be denied a mortgage loan as they were in the wake of the 2008 financial crisis. The share of total applicants who faced rejection dropped to 8.9% in 2019 from 18% in 2008, according to the latest annual figures just released by the Consumer Financial Protection Bureau. Still, Black loan seekers are more frequently denied due to debt and low credit scores. These two factors are more likely to be roadblocks for Black mortgage applicants due to decades of wealth inequality, as well as bias among lenders.

While the racial mortgage gap has narrowed over the years, Black Americans are still denied home loans at a higher rate than white Americans in every one of the 50 most populous U.S. metros. 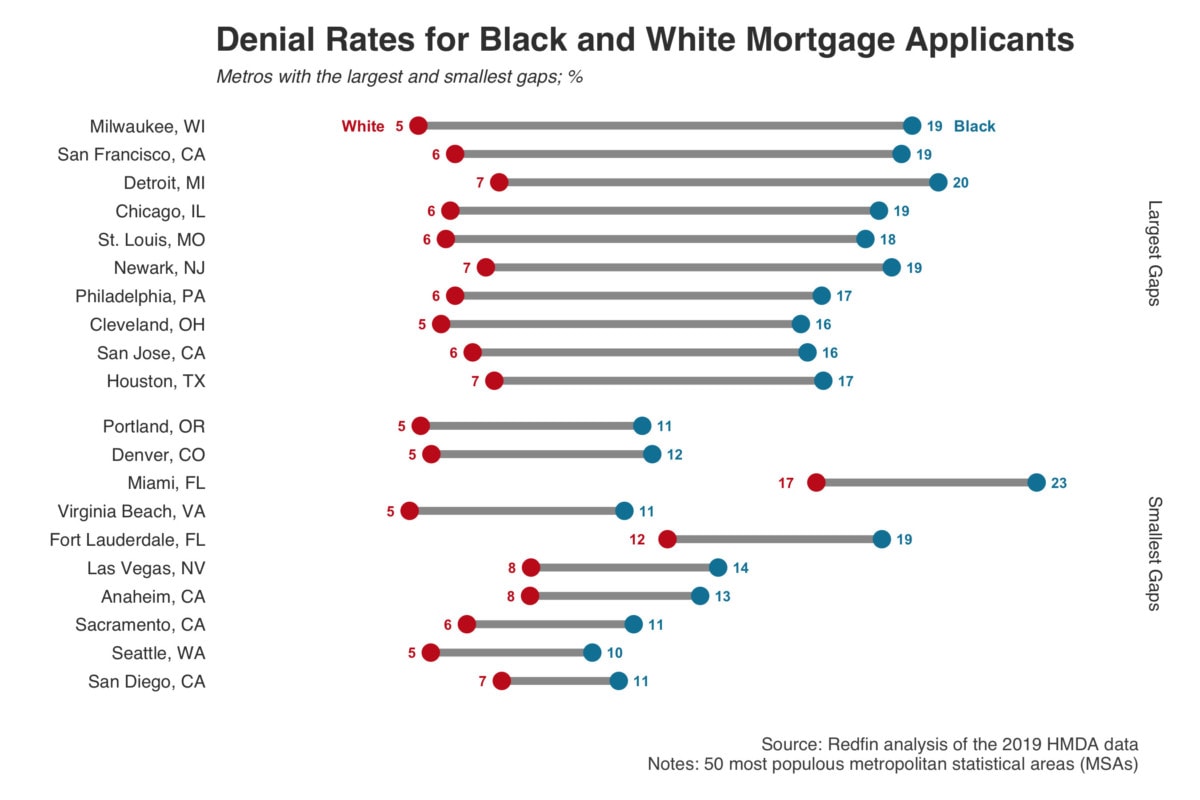 Milwaukee is the most segregated metro in the nation—with almost 90% of African Americans living in the inner city—while Chicago, Detroit and St. Louis are the third, fourth and sixth most segregated. Milwaukee also has the second-lowest Black homeownership rate of any metro in the U.S. Just 27% of Black families there own their homes, compared with 70% of white families—13 percentage points wider than the national gap.

“The residue of redlining is still very tangible in Milwaukee and Chicago,” said Arnell Brady, a Redfin Mortgage adviser who represents both cities. “Segregation continues to perpetuate the uneven playing field for Black communities, which are severely underserved when it comes to financial education and access to credit. Buying a home isn’t like walking into a bank and getting a credit card. Everyone wants a piece of the American dream, but that’s hard to achieve when you don’t have access to the right tools and information.”

Redlining is the racist 1930s-era housing policy that effectively prevented Black families from getting loans by deeming minority neighborhoods “hazardous” for mortgage lending. In Milwaukee, the typical homeowner in a neighborhood that was redlined has missed out on $97,000 of home equity during the past four decades. Wisconsin-based Associated Bank, which has a significant presence in Milwaukee, agreed to pay a $200 million settlement for modern-day redlining as recently as 2015 after engaging in discriminatory lending practices against African American and Hispanic applicants between 2008 and 2010.

While debt is the number-one explanation lenders provide when denying applicants across races, Black homebuyers are more frequently turned down for this reason, according to the CFPB. Of Black mortgage applicants who are refused home loans, 32.5% are turned away because of their debt-to-income ratios versus 27.9% of white applicants.

In a Redfin survey from February 2020, 45% of the 232 Black respondents said that student debt, specifically, stopped them from trying to buy a home sooner. That compared with 31% of white respondents. 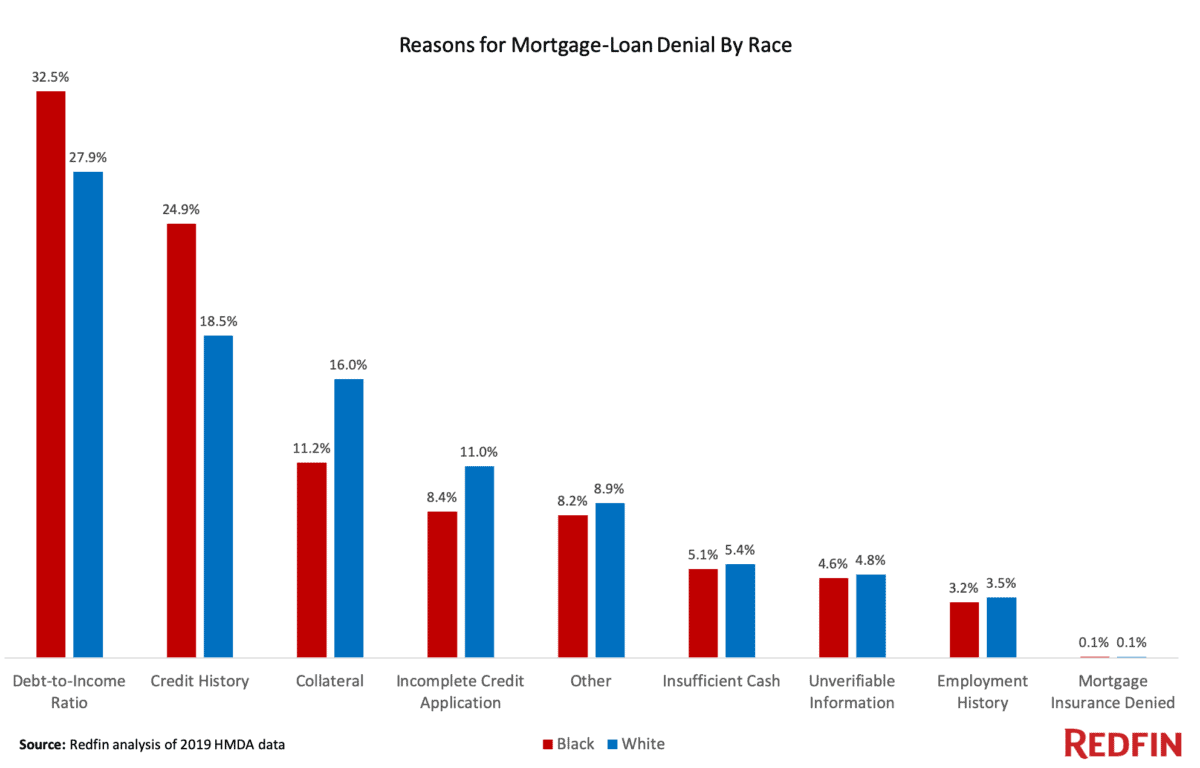 The discrepancy is even more stark when it comes to credit, with a quarter of denied Black applicants being shown the door due to their credit histories, versus just 18.5% of white applicants. Research has shown that the algorithms many lenders now use in credit scoring, which are meant to be unbiased, may actually systematically deny credit access to specific groups.

Scroll to the bottom of this page see a table of mortgage denial rates by race for the largest metros, broken out by reasons for rejection.

While banks often cite debt or a low credit score as the reason for denying mortgages to Black Americans, biases held by lenders also play a part.

“Banks still have a lot of power when it comes to determining who gets a loan,” Brady said. “Black applicants are more likely to be asked to provide additional documents despite very clear guidelines from federal agencies on what’s required. I’m a mortgage adviser who knows the rules backward and forward, and I’ve encountered this as a loan-applicant myself. Why are you asking me for two years of tax returns when the requirement is one?”

One way to curtail this discrimination would be to hide applicant names and races/ethnicities from underwriters when they are determining risk, according to Elizabeth Korver-Glenn, an assistant professor at the University of New Mexico.

Another problem is the lack of incentive to help clients with low credit scores, Brady added. Loan officers in the industry are more likely to offer advice to a borrower who already has a high FICO score and just wants to secure a better interest rate than to help someone who needs to increase their score to the 620 minimum just so they qualify for a loan, he said.

“Some lenders might help the person with a 615, but nine times out of 10, they won’t because they’re less likely to close a deal with that person. The statistics don’t track that,” said Brady. “Most banks aren’t in the business of helping you get over the hump. We need more people who are dedicated to helping moderate-to-lower-income people reach the finish line.”

Beyond providing bias training and incentivizing mortgage brokers to lend money to people of color and low-income Americans, there are countless ways to even the playing field. For example, offering more homebuyer classes and financial education in minority communities could help more people of color realize homeownership is within their means.

“Many people aren’t aware that you don’t need a 20% down payment or a 750 credit score to buy a house,” Walker said. “There are down payment assistance programs that buyers can take advantage of, but they have higher interest rates. Luckily, you can refinance out of those higher rates, but in order to do that, you need to understand refinancing.”

Diversifying hiring within the mortgage and real estate industries is another way to help ensure that underserved communities have advocates to educate and guide them through the loan application and homebuying processes. Just 26.4% of workers in the housing industry identify as a racial or ethnic minority, according to Fannie Mae.

“If you’ve worked for the post office for 20 years, that should be scored higher than working for a startup out of someone’s garage for two months,” he said. “The post office is going to be here 10 years from now, but the startup in the garage might not be.”

Mortgage Denial Rates By Race for the 50 Most Populous U.S. Metro Areas

*NOTE: Lenders can report multiple reasons for denial. Thus, the sum across the reason columns can be greater than 100%.

This report is based on the 2019 public Home Mortgage Disclosure Act data (HMDA). We report on the 50 most populous U.S. metropolitan areas. The white race category is defined as respondents whose race was reported as white and ethnicity was reported as not Hispanic or Latino. We looked at home-purchase applications for which the following lender actions were taken: loan originated, application approved but not accepted by the borrower, and application denied. The 2,912,254 applications we analyzed were for first liens on occupied single-family, 1 to 4 units only. We exclude loan applications to the USDA Rural Housing Service or Farm Service Agency (RHS or FSA), so we only look at conventional, FHA and VA loans. We also exclude loans for investment properties. The national denial rate figures by race are from the U.S. Consumer Financial Protection Bureau and represent the home-purchase applications in the HMDA data for the entire U.S. They also include RHS and FSA loans.

The post Milwaukee, San Francisco and Detroit Top the List of Places Where Black Homebuyers Are More Likely to Be Denied a Home Loan appeared first on Redfin | Real Estate Tips for Home Buying, Selling & More.