Murray Gardner is the kind of person who knows what he likes and makes it happen.

At just 3 years old, the young Australian dreamed of becoming a fighter pilot. So he went on to attend the Defence Force Academy and fly fighter jets for the Royal Australian Air Force. When he was on an exchange tour with the U.S. Navy, Murray became instantly enamored with a small town tucked into Utah’s eastern Wasatch Mountains. So he acted on it. “I fell in love with Park City on day one,” he says. “On day two, I bought a condo.” 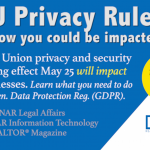 Can an EU Rule Impact Your Real Estate Business? It MightUncategorized