Among approximately 3,000 REALTORS® who answered this question in the September 2018 REALTORS® Confidence Index Survey, the median expected price change in the next 12 months nationally is about two percent, a slower price appreciation compared to the 4.0 percent average during the January through May 2018 surveys (2.1 percent in August 2018 and 2.7 percent in September 2017).

The chart below shows the median expected price change across the U.S. states based on the responses of REALTORS® in the July, August, and September 2018 surveys.[1] Idaho is expected to have the strongest price growth at four to five percent.  Home prices are expected to appreciate by a modest two to three percent in states such as Washington, Colorado, New Mexico, Ohio, Pennsylvania, Virginia, North Carolina, and Georgia. In 21 states that includes California, Oregon, Texas, New York, Massachusetts, Connecticut, and New Jersey, REALTORS® expect flat to two percent price growth over the next 12 months. 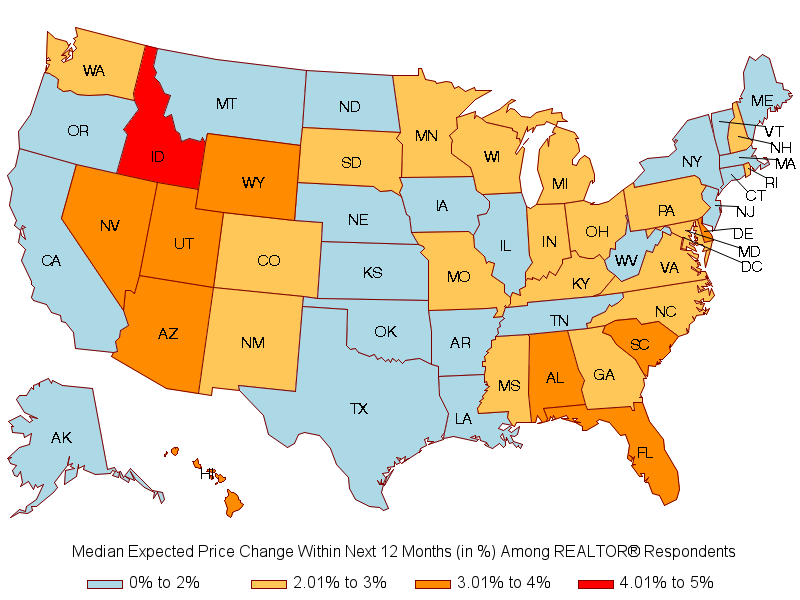 Use the data visualization tool to explore how median listing prices are trending across metro areas:

[1] In generating the indices, NAR uses data for the last three surveys to have close to 30 observations. Small states such as AK, ND, SD, MT, VT, WY, WV, DE, and D.C., may have fewer than 30 observations.