San Jose Home Prices Down 8% From Last Year, Falling for First Time Since 2012

In San Jose, December 2018 and the first few weeks of 2019 brought new lows for home-price growth and bidding wars.

The median home price in the San Jose metro area was down 8 percent annually to $975,000 for the month ending on January 20. That continues a trend that began in December when local home prices fell 7.3 percent, the first year-over-year price drop recorded in the area since the beginning of 2012.

It’s also the first month prices in the region have dipped below the million-dollar mark in the last year. The median sale price in the San Jose metro area, which we define as Santa Clara and San Benito counties, surpassed $1,000,000 in the middle of 2017 and peaked in April 2018 at $1,300,000.

Bidding wars are also at a seven-year low in the San Jose area. Twenty-three percent of offers local Redfin agents wrote on behalf of their homebuying customers faced competition in December, the first time the bidding war rate has dropped below 50 percent since at least January 2012. The rate peaked at 95 percent in January 2018 and it was 83 percent as recently as this past September.

Sellers started realizing the market in San Jose was undergoing a shift—caused in part by the volatility of tech stocks—toward the end of last year and many of them put their homes on the market at lower prices than they would have in the beginning or middle of 2018, according to local Redfin agent Kalena Masching.

“Big tech stock prices have been volatile in recent months and that’s affecting everything in our area,” Masching said. “A lot of buyers rely on their stock compensation for a down payment. For many people, that means a home or a neighborhood that was within their budget a few months ago may now be out of reach if their company’s share price declines.”

“And for people thinking of moving to San Jose from different parts of the country, local job offers from tech companies aren’t as enticing as they once were because home prices reached such a high peak in 2018,” Masching continued. “People are turning down job offers to move here because they realize that even with a good salary they won’t be able to afford a single-family home in San Jose, especially now that they have the option to live in a more affordable city where some of the same companies are opening big offices.”

In other parts of the Bay Area, median sale prices are either slightly down or slightly up. In the San Francisco metro area, which we define as the city of San Francisco and San Mateo County, the typical home sold for $1,2750,000 in the month ending on January 20, down 4.1 percent from a year ago. And in the Oakland metro area, which is home to two of Redfin’s hottest neighborhoods of 2019, the median sale price is $669,000, up 3 percent year over year.

San Francisco and Oakland both have more public transportation options than San Jose, according to Masching, making for an easier commute for people who work at companies north of San Jose in places like Palo Alto and Mountain View, particularly at businesses that don’t provide commuter shuttles.

“The commute in and out of San Jose is terrible and has gotten worse with the influx of tech jobs in the area,” Masching said. “If you live in downtown San Jose and work in Mountain View, for example, it’s less than a 15-mile drive, but it can take 60 minutes during rush hour. My clients are realizing they want to live closer to where they work so they can have a better work-life balance, which starts with spending less time on the road and more time with their families.”

The typical home that sold in San Jose in the month ending January 20 went under contract in 44 days, up from just 12 days a year earlier.

“As our market shifts, it’s important for buyers to carefully consider how long they’ll stay in the house,” Masching said. “A one-bedroom condo may be enticing for a newlywed couple, but will it still work for them in three or five years? More and more, I’m telling people to think long term because the days of selling at a profit a year after buying seem to be behind us for now.”

The post San Jose Home Prices Down 8% From Last Year, Falling for First Time Since 2012 appeared first on Redfin Real-Time. 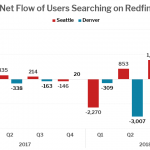