Survey: Almost Half of Recent Homebuyers Made an Offer Sight-Unseen, the Highest Share on Record

45% of surveyed homebuyers said they made a bid on a home without first seeing it in person, up from 28% in 2019. Redfin agents cite health concerns around the pandemic and competition fueled by a worsening housing shortage as reasons more buyers are bidding on homes before visiting them.

Almost half (45%) of people who bought a home in the past year made an offer on a property that they hadn’t seen in person, the highest share since at least 2015, according to a Redfin-commissioned survey in May and June of more than 1,400 people across 29 major markets. That’s up from just 28% during the same period last year, and 20% in July 2015, when we posed this question for the first time. 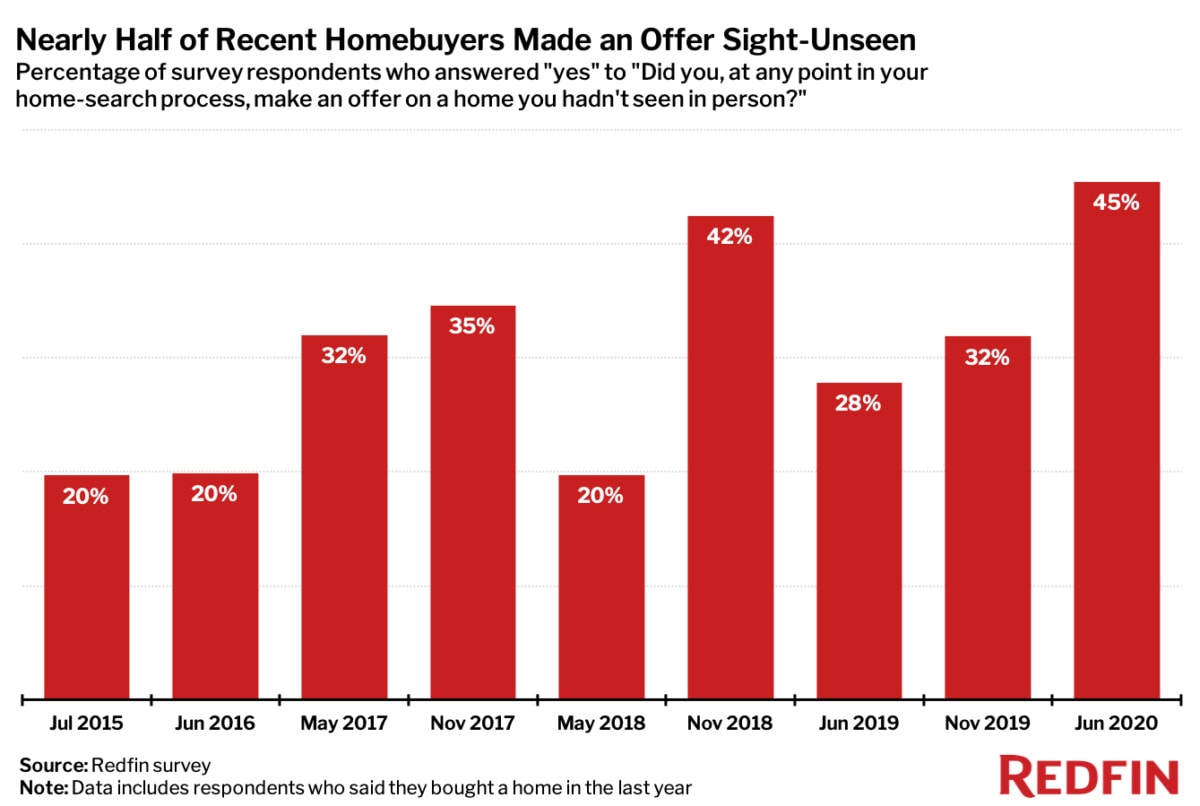 Sight-unseen offers will likely continue to climb in the coming months, according to Redfin chief economist Daryl Fairweather.

“I predict that by the end of the 2020 homebuying season, the majority of homebuyers will have made a sight-unseen offer,” Fairweather said. “The pandemic has changed the way many people view homes, and on top of that, the market is highly competitive. If you aren’t using this strategy, another buyer who is could beat you to the punch.”

Many buyers have opted for sight-unseen offers because it feels like the safer choice as coronavirus cases continue to climb across the country, according to Redfin agents. While it’s still rare to complete the entire homebuying process without seeing the property in person, Los Angeles homebuyer Gladys Sanchez is planning to do just that. Sanchez, who lives with her immunocompromised sister, has virtually toured a dozen homes in and around the Sherman Oaks neighborhood with the help of her agent, Lindsay Katz.

“I never would have chosen to buy a house this way, but I’d rather take a risk with my home purchase than take a risk with my family’s health,” Sanchez said. “I can usually get a pretty good sense of a property on a video tour, and I’ve learned to ask the right questions. Where in the building is the unit? Is it near any dumpsters or alleyways? Is there a garage, and if so, is it covered? Can you smell any secondhand smoke from the unit?”

A July Redfin survey of more than 1,000 people found that about a quarter of respondents who plan to buy a home in the next year are limiting the number of properties they’re touring in person due to the coronavirus, while 18% aren’t touring in person at all.

In New York City, some sellers aren’t even allowing buyers into their homes until they’ve been pre-approved for a mortgage, according to local Redfin agent Martin Freiman.

Intensifying competition is also contributing to the uptick in sight-unseen offers. More than half of Redfin offers faced bidding wars last month as the number of homes for sale continued to shrink and mortgage rates dropped to a record low, making it all the more advantageous for house hunters to get their offers in ASAP—sometimes before seeing the home in person.

The market in the Seattle suburb of Sammamish is so hot that Redfin agent Meirav Yaaran had to send someone to wake up her clients—by knocking on their door and flashing car headlights into their windows—so they could beat out a competing offer.

Yaaran’s clients, who were at the time living in Virginia but planning to move back to the Seattle area for a job at Amazon, found their dream home after doing a video tour on FaceTime. They sent a Seattle-based relative to attend an in-person showing and the pre-inspection, submitted an offer at 6:20 p.m. PT on a Wednesday, and went to bed soon after. Later that night, Yaaran got a call from the listing agent, who asked if they could come back to the negotiating table because there was a strong competing offer set to expire at midnight. The seller wanted to know if Yaaran’s clients would be OK with him leaving his furniture behind and entering a rent-back agreement, which allows a seller to sell and then lease back their home so they have more time to find a new one.

“I tried calling my clients, and even their daughter, but no one was picking up. Finally, I got my client’s father on the phone, who asked a family friend in Virginia to drive to their house and wake them up at 1 a.m.,” Yaaran said. “They must have thought I was mad, but we won! They just saw their home in person for the first time, 48 hours before their July 15 closing. They were in shock when they walked into their new backyard because it was so much bigger than it looked on FaceTime.”

Plus, buying a home remotely has become easier as touring technology has improved. Views of virtual 3D walkthroughs on Redfin.com have surged 243% since late February, and video tours led by Redfin agents now account for 10% of all Redfin home showings, up from less than 1% at the beginning of March.

When leading virtual tours, Katz makes sure to keep her clients abreast of issues they may not think to ask about: “I always, always, always show them around the neighborhood. If there are issues with the inside of a house, they can get those fixed, but they can’t fix a neighborhood,” she said. “I also like to turn off any lights so they can see the natural light, and let them listen so they can hear any street noise.”

Still, making an offer on a home sight-unseen can be risky. Sanchez recently went into escrow on a home in Los Angeles, and then learned during the inspection that there was a problem with the electrical panel—an issue she considered to be a deal breaker. Fortunately, the inspection contingency enabled her to back out of the purchase. Some buyers, however, are relinquishing this option in an effort to win bidding wars; the share of successful offers waiving the inspection contingency rose to 20% in June from 13% a year earlier.

Sight-unseen offers can also pose risks to sellers. Buyers who make these so-called blind bids don’t always stick to agreed-upon timelines, and may submit sky-high offers just to throw their hats in the ring before ultimately backing out, Redfin agents say. Some sellers in Los Angeles are refusing to consider blind offers all together, according to Katz.

“FaceTime is pretty good, but it’s typically better for everyone if the buyer can see the house in person,” Katz said. “Most people who make sight-unseen offers find a way to visit the home before actually closing the deal, even if it’s just a few days before getting their keys. If the pandemic gets significantly worse, that could change.”

From May 21, 2020 to June 8, 2020, Redfin surveyed more than 4,500 U.S. and Canadian residents who bought or sold a primary residence in the last year, or plan to in the next 12 months. In this report, we only analyze responses from the more than 1,400 respondents who bought a home in the last year. While the survey covered numerous topics, this report focuses on responses to the following question: “Did you, at any point in your home-search process, make an offer on a home you hadn’t seen in person?” Where possible and applicable, results were compared with those from similar past surveys.

The post Survey: Almost Half of Recent Homebuyers Made an Offer Sight-Unseen, the Highest Share on Record appeared first on Redfin | Real Estate Tips for Home Buying, Selling & More.