San Jose, Seattle and San Diego saw big year-over-year gains in the share of homebuyers’ winning the first home they make an offer on.

Another sign that the housing market is shifting toward buyers’ favor in 2019: 56 percent of buyers nationwide who purchased a home in the first quarter closed on the very first home they made an offer on, up from 52 percent a year earlier, and the highest first-offer success rate in three years. This is according to an analysis of home offer and purchase data from thousands of people who bought homes with Redfin agents nationwide over the past five years.

More than half (53%) of San Diego homebuyers last quarter closed on the home that was the first one they bid on, up from 38 percent a year earlier. In Seattle, the first-offer success rate increased to 59 percent last quarter, up from 45 percent in the same period last year.

“Last year homebuyers had to pull out all the stops to land a home in competitive West Coast markets, but this year there are more homes for sale and the odds are more in the buyer’s favor,” said Redfin chief economist Daryl Fairweather. “In San Jose, the market has dramatically slowed from a year ago, and it’s actually now easier to get an offer accepted in San Jose than in many other parts of the country.”

San Jose now has the second-highest first-offer success rate in the nation, behind Charlotte (70%).

Below is a ranking by first-offer success rate of the 25 largest metro areas Redfin agents serve:

“2018 was a difficult year to buy a home in San Jose,” said Redfin agent Stella Phua. “Very few homeowners were listing their homes for sale, and nearly everyone who did received multiple offers with few if any contingencies. Many buyers, especially first-timers or those who needed financing, were not quite ready to compete at that level. This year, buyers are more prepared to make strong offers, and there are more homes being listed, which is really helping.”

Not every market is moving in buyers’ favor, though. In San Antonio, Austin and Phoenix, the first-offer success rate fell from over 50 percent last year to under 50 percent this year. Both Austin and Phoenix were top migration destinations in the latest Redfin Migration Report. Austin and San Antonio saw the largest decreases in the nation, each falling 12 points. As more people continue to move to affordable inland markets, buyers in those areas can expect to encounter more competition in their search for a home.

The post West Coast Buyers are Now More Likely to Win the 1st Home They Bid On appeared first on Redfin Real-Time. 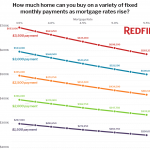