What is a Carriage House? Charming 1800s Dwellings

A carriage house— also called a coach house— is a building near a larger home that was originally used for storing a horse-drawn carriage and housing the carriage’s driver (coachman). Think of them as a detached garage (although some are attached). Carriage houses today are often renovated into accessory dwelling units (ADUs), which can be used as both a garage and a living space, such as a guest house, in-law suite, office, studio, or rentable apartment.

This popular house style makes for a unique and charming, yet useful space. Some home buyers search for properties that include them, while others search for carriage houses sold as an individual unit so they can use them as single-family homes. Learn everything from the origin of the carriage house to its unique characteristics, advantages and disadvantages, and how you can buy one of these whimsical houses.

History of the carriage house 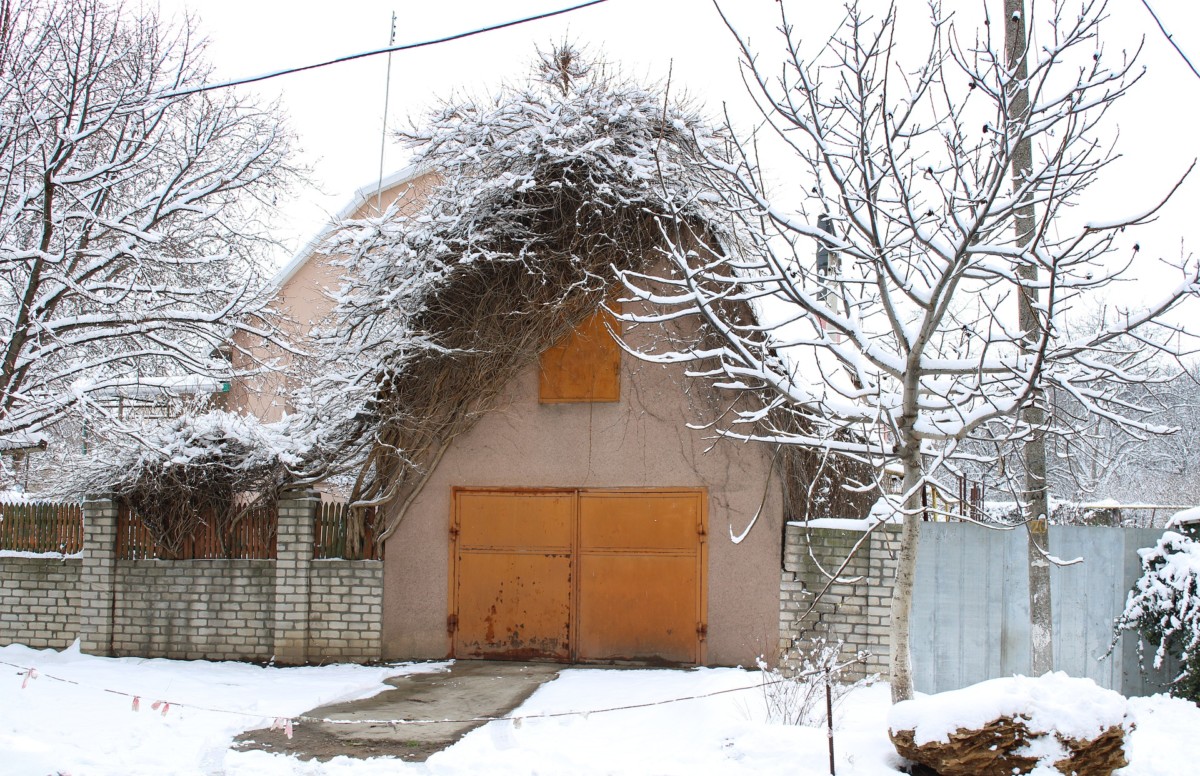 However, riding by horse and carriage was not available to everyone. Households needed to have enough funds to support the cost of the carriage, horses, and the coach driver, not to mention the financial ability to build a coach house in the first place. This is why carriage houses are often attached to a larger estate.

A carriage house and a carriage home are often thought of as being the same thing, when in fact they aren’t. The more iconic carriage house is the (typically) standalone garage-predecessor built as part of a larger estate. Both structures are generally built with a garage space on the bottom and a living quarter on the top.

This is in contrast to a carriage home. A carriage home (or condo/townhome) is a residential property that comes up to or lies on the home’s property line and is usually built with shared walls. They often look similar to townhouses, but they include a garage, and owners of carriage homes also own the land the unit sits on. 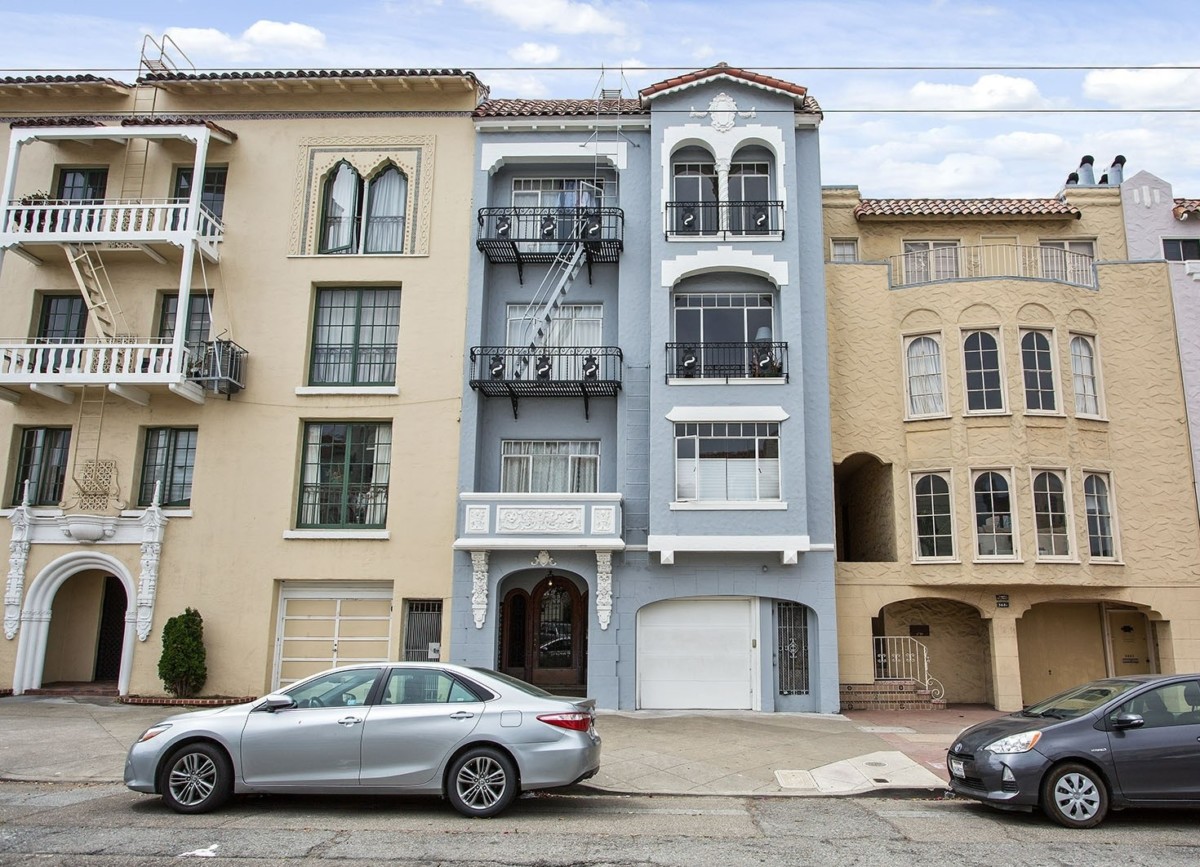 Standard carriage houses are usually one and a half story buildings. On the first level there is a large room with high ceilings— twelve to twenty feet— which was where they stored the horses and carriages. These days this space is where cars are usually stored. The coachman’s apartment took up the second floor, which sometimes was divided into smaller rooms. Because this is usually a half-level floor, the ceilings can be quite low.

Carriage house layouts are generally square-shaped and feature a front-facing double door for the carriage. A side-facing single door is usually present for personal entry – practical designs for the building’s original purpose.

Modern carriage houses— houses built after automobiles became more accessible— can be found in a wide variety of styles. They usually feature a modern garage door entrance on the ground floor and are located in the front of the main house. These can be built as a single-family home without a larger residence or as an additional living and multipurpose area, generally on larger properties.

Characteristics and charm of the carriage-style homes 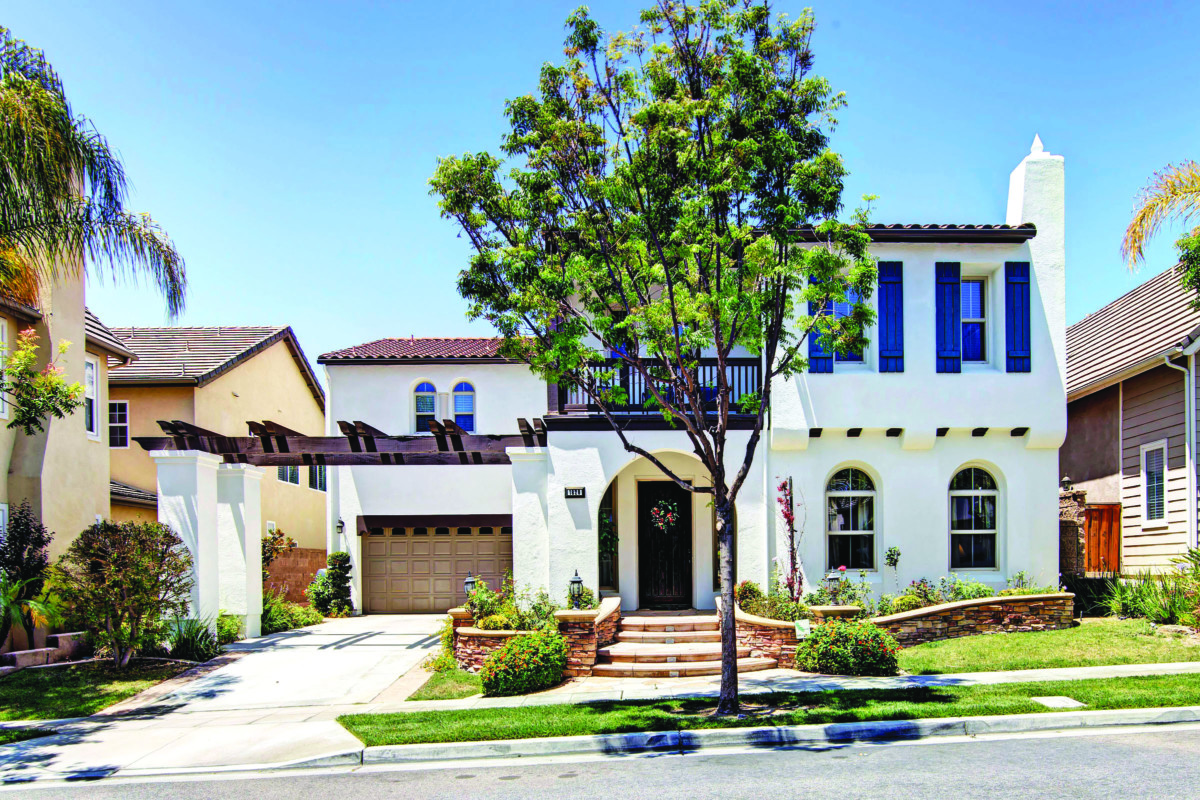 Carriage houses were typically built as independent outbuildings, i.e. a building that stands alone from a larger house. In some cities, especially New York, they can be found attached to the larger home, either below it (ground level) or beside it.

The carriage house mirrors  architectural themes of the estate – think of it as a separate garage in the same style as the main house. Their miniature size adds to their charm and people who lean toward romantic and whimsical homes often fall in love with these gems.

Because the carriage house only echoes the style of the main house, it can vary widely in its details. For example, a carriage house behind a larger Colonial style house would typically have simpler details and be less adorned. But the true mansions of their era may have had carriage houses with stunning intricacy and superfluous details such as a belvedere – a small, many-windowed room atop a building meant for taking in a scenic view.

In the U.S., most carriage houses were built during the Victorian Era. This was an architectural period that began in 1837 and lasted until the early 1900s, although Victorian architecture was most prevalent from 1860 to 1900.

The Victorian carriage house can be found in many Victorian styles, including the Queen Anne and Italianate styles. Most have been retrofitted into modern garages, apartments, or studio spaces. Because these are usually retrofitted, they are the most unique and quirky among the wide array of carriage houses.

A carriage house condo— or carriage home— is an attached single-family home (i.e. shares walls with neighbors, sometimes called a duplex) that sits on a small lot. Unlike the typical condo, the owner of the carriage home also owns the land it sits on. The lot is usually only slightly larger than the footprint of the home, typically referred to as a “zero lot line” home.

Inside, the carriage home is configured into multiple rooms, which are usually smaller in size. Carriage house condominiums are more modern dwellings that were generally built within the last 30 years.

A carriage house townhome— or carriage home— usually refers to a townhouse with a ground level garage resembling a traditional carriage house. However, in a townhome, above the garage is a much larger dwelling, typically two to three additional stories. Like other townhomes and condos, it shares walls with neighbors. 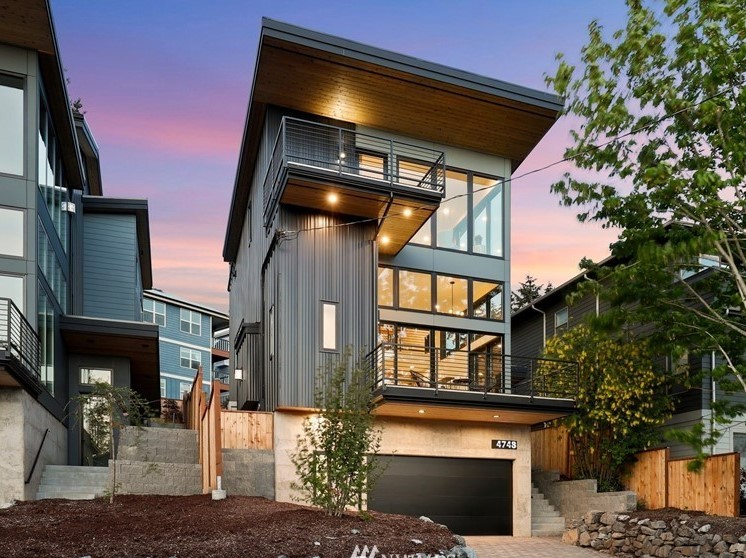 A modern carriage house is a standalone home that’s built in reference to its predecessor. The ground level is a modern garage usually ranging in size to fit one to three cars. Above it is the dwelling house, which has one or two full stories with standard ceiling heights. Think of it as a larger carriage house townhome.

Carriage houses can also be built from a kit. The most common kits include a two-story garage with a small apartment on the upper level. They’re smaller than the average house, with the footprint of a one or two car garage. Many of them qualify as tiny houses as their typical size is 500 square feet of living area or less.

Modular carriage houses cost anywhere from $20,000 to more than $100,000 to build, depending on their size and features. They are a great option for single-family homeowners looking to add value to their home by adding space or as a rental unit to generate extra income.

The pros and cons of carriage-style architecture 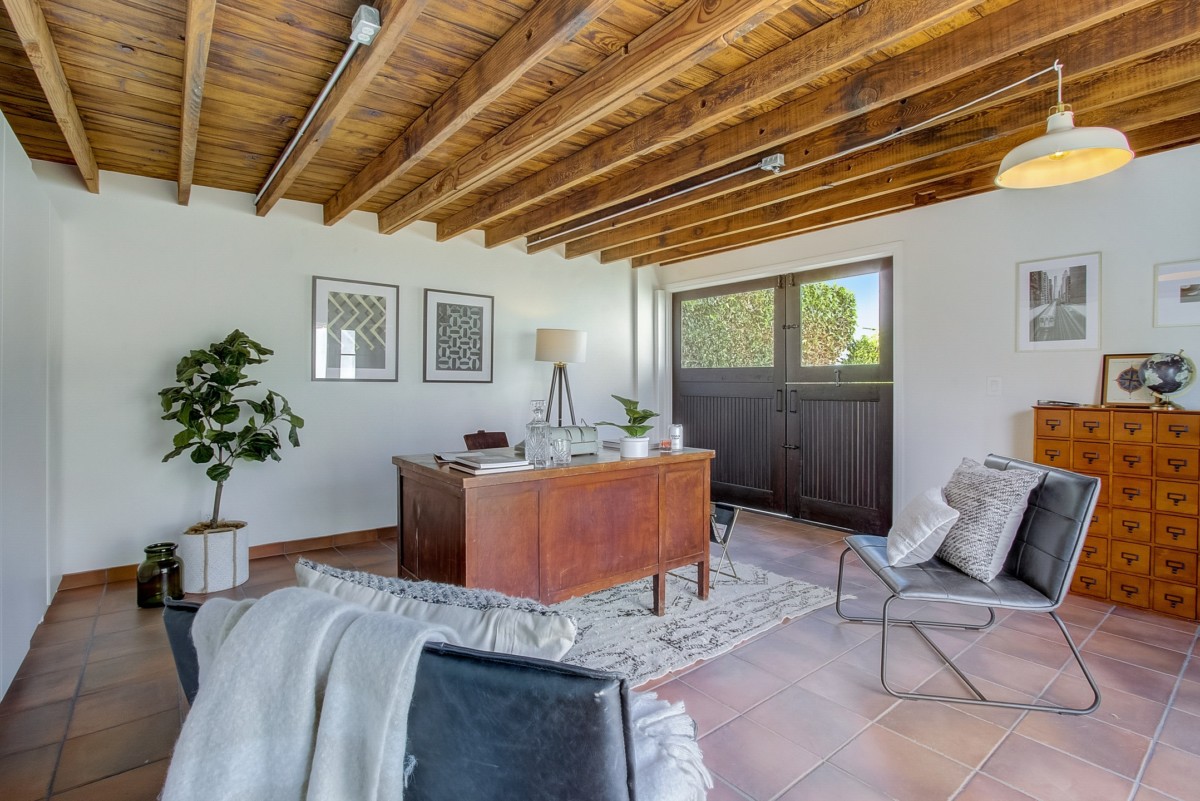 Converting a carriage house into a separate living space gives you the ability to create a unique home. The large and open lower level can be configured in endless ways to suit your particular needs; even small carriage house conversions result in one-of-a-kind cozy builds. Their uniqueness also means that your home will likely retain value and sell at a premium price.

If you don’t want to live in your carriage house, you can still use it for a number of purposes. Whether that’s converting it into a guest house, in-law apartment, home office, or studio, a carriage house can make your living situation more versatile and comfortable. And if you’re planning to sell your home, your carriage house will add a unique selling point.

Additionally, carriage houses can add value to your home as an income-earning unit and can sometimes even help cover some of your mortgage payment.

If your carriage house is used as another living space, it will come with additional upkeep costs. The extra space will cost you additional utility bills, and you should also anticipate costs for maintenance projects such as redoing the roof and siding. Even if you turn it into something that earns you income, you still may face a financial headache from time to time.

Modern carriage style homes are also typically smaller than the average home. Even larger ones tend to have a narrow footprint and multi-story accommodations. That means lots of stairs and more compartmentalization of the living spaces. And because they’re built over garages, modern carriage houses in colder climates need to make special considerations for insulation. 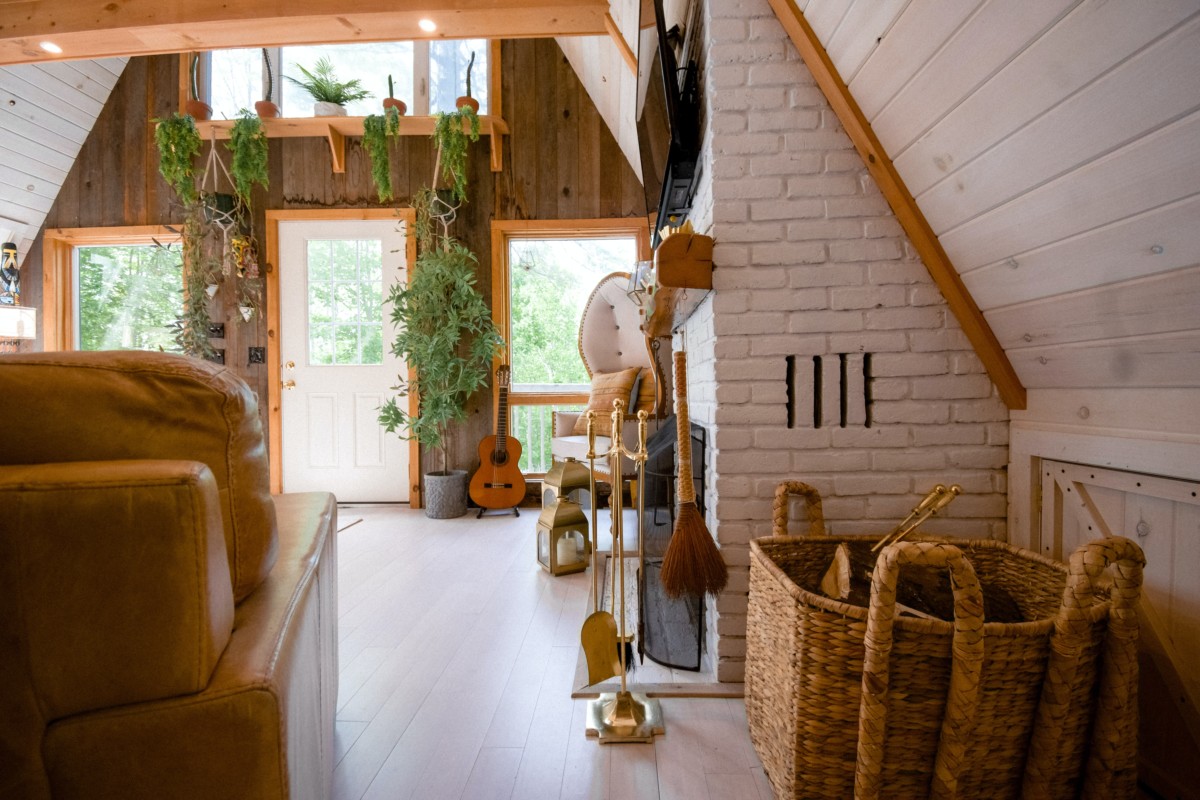 If you own a home with a coach house and are looking for renovating tips, here are some popular choices:

Where can you typically find carriage-style houses?

Traditional carriage houses are most often found in the Northeast and around New York, but they can be found all over the United States. Keep in mind they become less prevalent as you move westward. Most can be found in or near a metropolitan area that would have been thriving in the mid or late 1800s, such as St. Louis, MO.

Modern carriage-house-style homes can be found all over the country. They are popular add-ons to ranches and other large estates that might require larger garages. Carriage-style homes have more recently been a popular design in condo and townhouse communities.

How to find carriage houses for sale in your area

If a carriage house suits your style, Redfin can help you find one in your area. It’s simple: 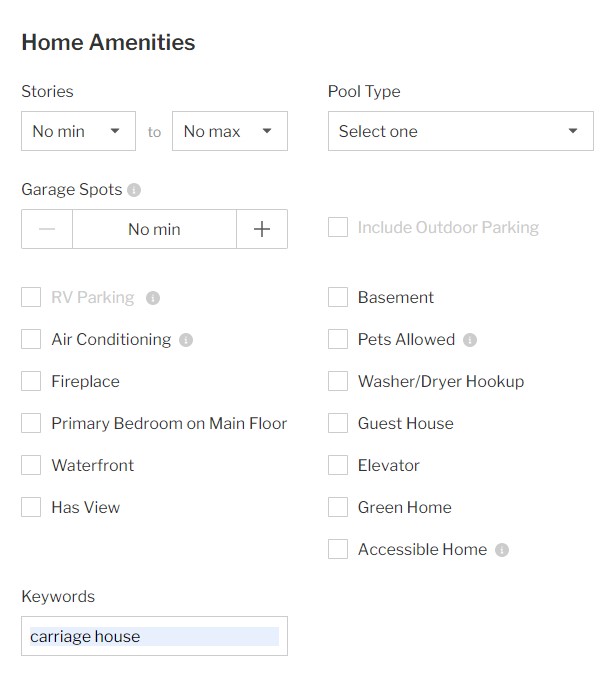 Most Popular Paint Colors to “Swatch” Out for in 2022Featured Post, Life & Style