Younger Boomers, buyers aged 53 to 62 years, made up 18 percent of all home buyers in 2017. The median age for this group was 58 years old and they were born between 1955 and 1964. This age group was the most likely to purchase a multi-generational home at 20 percent. Their reasons for purchasing a multi-generational home were children or relatives over the age of 18 years moving back in (23 percent), health/caretaking of aging parents (22 percent), and children over 18 years that never left (16 percent).

For Younger Boomers, the primary reasons they purchased homes were the desire to own a home of their own (17 percent), a job-related relocation or move (13 percent), and the desire for a smaller home (10 percent), more than other generations. Compared to other buyers, they said it was the right time and that they were just ready to buy when they did (49 percent).

Younger Boomers were less likely to purchase in the suburbs (50 percent) and most likely to purchase in rural areas (15 percent) compared to other generations. They had the second highest median household income at $94,000. They also purchased the second most expensive homes of all generations with a median home price of $249,200. This generation of buyers also purchased the third largest homes in size at a median square footage of 1,870.

Younger Boomers were the most likely to consider heating and cooling costs very important. This age group was unlikely to compromise on the price of the home as well as the quality of and distance from schools. Younger Boomers moved from their previous residence at a median of 17 miles. 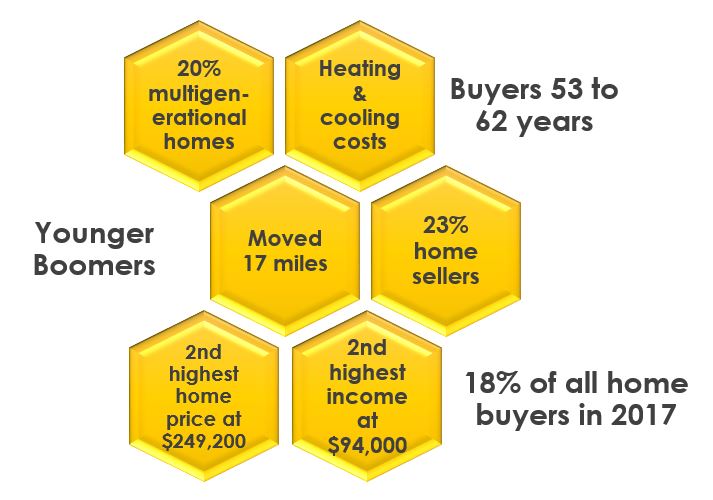 Younger Boomers were the second largest share of home sellers last year at 23 percent. They had the third highest median incomes for sellers at $100,000 (Millennials surpassed them this year) and sold the second highest median priced homes at $264,300. Younger Boomers were the most likely to sell a detached single-family home and sold the largest homes at a median of 2,100 square feet. They were the most likely to offer home warranty incentives to help sell the home.