Football stadiums are expensive — what does that mean for affordable housing?

Super Bowl Sunday is almost here. If you are from Boston or Los Angeles, you may be psyched to see your city compete, and if you are from Kansas City or New Orleans, you may be bummed that your team just barely missed out on Sunday’s championship. But, there are plenty of cities across the country that don’t have a football team at all, and while they never had a chance at hometown glory in the Super Bowl, residents of these cities may have won when it comes to affordable housing.

Before the Rams moved from St. Louis to Los Angeles, the city of St. Louis bid to keep the Rams by offering $400 million in state and city money for a new stadium. To put that amount in perspective, the city of St. Louis  spent only $5.2 million on grants and developments for affordable housing in 2018, and only $23.3 million dollars on affordable housing in the last five years. As another point of comparison, the median priced home costs $173,000 in St. Louis, so $400 million is the equivalent of about 2,300 St. Louis homes.

Public officials who supported using public funds to incentivize the Rams to stay in St. Louis  argued that the investment would spur economic growth. But, there is little evidence that the Rams’ absence has had an impact. Home prices in St. Louis were growing at a similar rate as the nation before and after the Rams left St. Louis.

The new Rams Stadium will be part of a planned neighborhood which will include business parks, shopping, a hotel, a casino, and luxury housing units, which are likely to further drive up property values in Inglewood. Redfin Agent Erica Whitaker said: “home values are continuing to rise after the announcement. We have more clients interested in Inglewood who were never interested before. I personally bought a home in Inglewood last year right after the announcement because I believed property values would go up. Attitudes are quickly changing – locals are already starting to think of Inglewood as part of the Westside.”

If you own property in Inglewood, you may be happy to have more amenities, have better access to jobs, and see property values rise, but renters and folks who were hoping to buy a home in the future may see their housing become less affordable. With about 64 percent of renter-occupied units, most residents in Inglewood are renters. About 60 percent of renters are already rent-burdened as they pay more than 30 percent of their household income in rent. These residents will likely be priced out and may migrate out of the Los Angeles area to somewhere more affordable — possibly a city without a football team.

The post Football stadiums are expensive — what does that mean for affordable housing? appeared first on Redfin Real-Time. 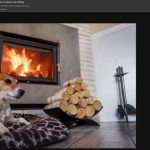 How I Staged it: The FireplaceUncategorized