Pending sales spiked 15 percent in the city of Seattle in January, up 8 percent in San Jose, Silicon Valley’s central city.

The market cooldown may already be over in Seattle, San Jose and Boston. Pending sales—the count of homes that went under contract during the month—were up 4 to 15 percent in January from a year earlier in the three cities. Closed sales are still falling year over year in each city, but the early indicator of pending sales points to a likely turning point for closed sales on the near horizon.

“The second half of 2018 was frustrating for sellers who listed just as the market began to cool,” said Redfin chief economist Daryl Fairweather. “Since then, more sellers have dropped their prices and as a result more homes are going off the market. Buyers who are still taking the wait-and-see approach, knowing the market is shifting in their favor, may want to take another look at the homes they favorited in the fall. We’re seeing this moment before the spring season arrives as an opportunity to get a home that’s been on the market for a few months under contract for much less than its original list price.”

In the city of Seattle January saw the first increase in pending sales since November 2017 and the largest since December 2016.

Based on the movement in the early indicator of pending sales and an uptick in touring activity being observed by Redfin agents, it’s likely that we will see closed sales in these cities begin to climb into year over year positive territory very soon.

“I’ve noticed a clear uptick in tours and offers on my listings, In the last month we’ve seen more buyers touring our homes for sale and we’re receiving more offers, especially on those that have been listed for a while,” said Seattle Redfin agent David Palmer. “I don’t think this year will be as crazy as the last five were, but things are already picking back up. Even as buyers return, home sellers should expect to negotiate more than they have in the past few years. The days of buyers waiving all contingencies are behind us.”

In the city of San Jose, the rebound actually started back in October, when the year over year growth in pending sales spiked its highest level since September 2015. In January the city saw 8 percent more pending sales than a year earlier. 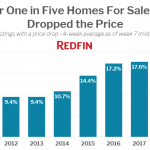