The following is NAR Chief Economist Lawrence Yun’s reaction to this morning’s U.S. Bureau of Labor Statistics (BLS) report on the employment situation in April:

“Another month of job additions implies more households  are in a position to buy a home. However, recent existing-home sales activity, at around 5.5 million per year, is well below its potential. That’s because similar home sales were occurring during the 2001 and 2002 period, when the housing market was considered fairly normal and somewhat boring, and well before the subprime-led bubble. 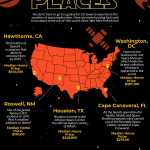 Infographic: May the Fourth Be With You!Uncategorized