The following is NAR Chief Economist Lawrence Yun’s reaction to this morning’s U.S. Bureau of Labor Statistics (BLS) report on the employment situation in June:

“A total of 213,000 net new jobs in June and 2.4 million over the past 12 months reflects a strong rolling economy. The latest month’s solid job additions mean further increase in housing demand. But inventory shortage and the consequent unaffordability have been a major challenge for potential home buyers. Part of the housing inventory shortage is due to the lack of construction workers. One encouraging aspect of the latest job report is the boost in the number of people seeking work. With more people entering the labor force and seeking work, some may turn to the higher paying construction industry. A typical non-supervisory worker in the private sector earns $22.62 per hour. In the construction industry, the pay is $27.56. Despite the low unemployment rate of 4%, the employment-to-population ratio is still soft with only 60.4% of American adults with jobs, compared to 63% before the Great Recession ten years ago. In other words, there is a potential for plentiful new workers coming into construction and that will help build more new homes and relieve the inventory shortage.” 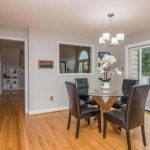 Staged to Sell: A Country Estate in Gaithersburg, Md.Uncategorized