The following is NAR Chief Economist Lawrence Yun’s reaction to the Federal Reserve’s decision today not to raise short-term rates, as well as how monetary policy the rest of the year will influence mortgage rates:

“The Fed will not be on standby for the remainder of the year. A total of three short-term rate hikes are likely. The series of rate hikes will nudge up mortgage rates, though not in one-to-one fashion. Moreover, the Fed’s quantitative un-easing of selling the bonds and mortgage-backed securities into the market (after having purchased in the recent past years) will also force up longer-term interest rates, including mortgage rates. Expect mortgage rates to reach 4.5% by the second half of the year.” 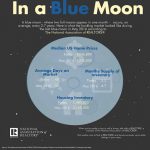 Infographic: In a Blue MoonUncategorized