Potential Investors Are Looking for Homes to Rent to Amazon Employees

According to news reports, Amazon is narrowing in on Crystal City and Long Island City as locations for its HQ2 (or maybe HQ2s). Since news broke over the past weekend, Redfin agents in both regions are reporting a noticeable jump in calls, emails and tour requests from prospective homebuyers interested in homes in these neighborhoods.

Redfin agent Mara Gemmond has a two-bedroom condo with views of the Washington Monument and U.S. Capitol listed for sale in Crystal City. After being on the market for several weeks with moderate interest, showings have gone through the roof since Monday. “I believe there is a lot of interest from investors who want a property they can rent out to a future Amazon employee, or possibly use for corporate housing. Investors are betting that prices will rise quickly, and they’ll be able to rent or sell for a nice profit once Amazon comes to town.”

Mara described the situation as the start of a horse race, with buyers getting lined up and ready to go, just waiting for the gates to open.

Leslie White, an agent in Washington, D.C., received a call in mid-October from a buyer in the Midwest. “She plans to purchase a small condo in the District that she can rent out, but she’s only interested in buying if Amazon moves to the region.”

Leslie says, “While it’s still speculation at this point, some buyers are considering taking action before a formal announcement from Amazon to get ahead of the news and the increase in demand and prices that is likely to result.  At the same time, prospective sellers right now are weighing whether it makes sense to delay putting their home up for sale to see if they can get more for their home after Amazon makes its announcement.” 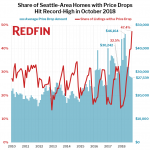 Almost Half of Seattle-Area Homes for Sale Dropped their Price in October, but by How Much?housing market tracker, Real Estate News & Analysis