Virginia Beach, Memphis and Indianapolis are the Most Affordable Housing Markets for Veterans

Of the more than 600,000 homes currently listed for sale in the 45 most populous metro areas, only 8.9 percent are affordable to someone earning the local median veteran income. This is down from 27.4 percent in 2012. Since then, home prices have grown by 55.3 percent in these metros, far outpacing the 1.6 percent increase in veterans median incomes from 2012 to 2016. Every market in our analysis posted a decrease in its share of listings affordable to veterans in the last six years.

“The affordability of VA loans is a major reason why the homeownership rate among veterans has historically been higher than for the general population. But this may be changing,” said Redfin chief economist Nela Richardson. “Homeownership among active-duty military declined significantly during the housing crisis and remains at historic lows. Veteran homebuyers are battling affordability as the fast pace, high prices and low inventory in today’s market make it hard to compete with all-cash buyers. U.S. housing policy should continue to ensure that the people who serve our country also have the opportunity to invest in our country through homeownership.”

Virginia Beach is the most affordable metro for veterans, with 38.1 percent of homes for sale affordable, followed by Memphis (36.3%), Indianapolis (26%) and Louisville (25.3%).

“Virginia Beach is the San Diego of the East Coast with several bases representing virtually all branches of the military,” said Redfin Virginia Beach agent Jordan Hammond. “For veteran home buyers transferring to the area, Virginia Beach is the perfect location. Not only is it close to the water and the nation’s capital, but it offers a much lower cost of living than California, where many are moving from.”

San Jose, the nation’s most competitive market, is the least affordable for veterans. Unsurprisingly, many coastal markets, including Los Angeles, San Francisco, Boston and Seattle, have fewer than 2 percent of listings within the reach of veterans.

Below is a ranking of metros according to the percentage of homes affordable for veterans.

Affordability for Female Veterans is Worse

Housing affordability is even worse for female veterans, for whom only 6.2 percent of homes currently listed across the 45 metros are affordable, compared to 9.1 percent for male veterans.

VA Loans may increase affordability for veterans in certain markets

Our study assumes a veteran is looking to purchase a home using the conventional 30-year fixed-interest mortgage. However, veterans are increasingly making use of VA loans to help afford a home in the current housing market. VA loans have a zero down payment requirement and it may even be possible to get a lower-than-market interest rate. In markets with a large military presence, such as Virginia Beach, VA loans are still the best route to homeownership. However, these loans may take longer to close, making it harder for buyers using them to compete in bidding wars, which are common in most markets due to low inventory. They may also require further approval for condos which would be entry-level homes for the most competitive markets. We encourage veterans to learn more about VA loans from their real estate agents and from the U.S. Department of Veterans Affairs.

We gathered median incomes for veterans for each metropolitan statistical area (MSA) from the American Community Survey (5-year) for 2016 and 2012. Based on these median incomes, we calculated the maximum monthly mortgage payment, at a 4.6 percent current interest rate (and 3.8 percent for 2012), using a 30 percent of gross income affordability threshold.

Next, we gathered all multiple listing service (MLS) listings active on the market in the 45 largest metros for which data was available as of April 30, 2018. Using the list price, current homeowners association (HOA) dues, and the property tax rate for each listing, we calculated the estimated monthly mortgage cost with a 4.6 percent interest rate and 20 percent down payment of the current list price and determined the percentage of homes where the monthly mortgage payment was equal to or less than the max monthly mortgage payment possible for the veteran median income in each metro.

We then performed the same analysis for the same date in 2012 to make a six-year comparison in incomes and affordable listings by area.

The post Virginia Beach, Memphis and Indianapolis are the Most Affordable Housing Markets for Veterans appeared first on Redfin Real-Time. 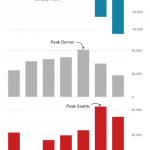 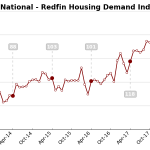