Where is the Workforce Moving?

What to expect from the local housing market?

People are changing jobs every 4 years[1] on average, according to the U.S. Bureau of Labor Statistics. Since U.S. workers are changing jobs more frequently than a couple of years ago, we take a closer look at the most popular moving destinations and the local housing market conditions in these areas.

LinkedIn releases every month the LinkedIn Workforce Report.  In addition to employment trends in the U.S. workforce, this report provides insights into migration trends in 20 of the largest U.S. metro areas[2]. These metro areas represent nearly the 40 percent of the civilian population across the U.S. For data purposes, migration is defined as a member changing their location on their LinkedIn.

Denver gained the most workers in the last 12 months from Chicago, New York, and the San Francisco Bay Area. Nearly 96,000 workers moved to Denver in the last year from Chicago. But where do most workers from Denver move to? Hover over the charts below to see the in/out-flows for Denver.

If you wonder what types of jobs are available in Denver, the Conference Board, Inc. produces the Help Wanted OnLine Data Series (HWOL), which measures the number of new, first-time jobs and jobs reposted online from the previous month. Among the six largest online occupational categories posted in the last year, 35 percent of the online advertisements were related to Computer and Math, Education and Healthcare. Compared to a year ago, these occupational categories experienced the highest growth in advertisements. Additionally, LinkedIn reported that Denver has a scarcity of workers in Healthcare Management and Education and Teaching. This means that employer demand for these skills exceeds worker supply requiring workers with these skills to move to the area to fill the skills gaps.

Since housing accounts for about 37 percent of the average American’s budget, these new residents should know what awaits them in Denver. So, what should they expect? It is interesting to note that most movers came from Chicago although Denver is less affordable than Chicago. Based on the REALTORS® Affordability Distribution Curve and Score, a typical household, earning about $60,000, can afford to buy 41 percent of homes currently listed for sale in Chicago. However, the same household can barely afford to buy 18 percent of the housing inventory in Denver.

The visualization below allows you to see the in/out-flows for the 20 largest metro areas and the housing market conditions for these areas:

[2] To develop the list of cities that gained the most workers, LinkedIn analyzed migration of its members in and out of 50 of the largest U.S. cities (in terms of LinkedIn membership) for the past 12 months. 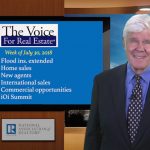 Are You Competing for a Real Estate Pie That’s Not Growing?Uncategorized