20% of Recent Homebuyers Made an Offer Sight-Unseen, Down from 35% Late Last Year

One in five recent homebuyers said they made an offer sight-unseen, according to a Redfin-commissioned survey in May of 1,463 people across 14 major markets who had bought a home in the last year. That’s down from 35 percent in a similar survey conducted in November, when the share of buyers making sight-unseen offers had been growing consistently for at least a year and a half.

When we first noticed in May that the prevalence of sight-unseen offers had returned to its 2016 levels, we were at a loss for a clear explanation. At that time, the market was breaking records for price growth, competition and home-selling speeds. Buyers felt pressured to move incredibly quickly to secure the most desirable homes, which were off the market in a matter of days. Making an offer without seeing the home first in person had become an advantageous strategy for buyers in inventory-strapped markets like Denver or Seattle.

In July, we first reported that the market was beginning to shift toward buyers’ favor, with rising inventory and slowing price growth.  Buyers had become more choosy about what homes to move on and were behaving less hasty in making offers. And now, buyers are facing fewer multiple-offer situations, which allows buyers even more time to visit homes in person before making an offer. We now understand that the declining prevalence of sight-unseen offers was likely an early indicator of this changing market. This is a trend we’re going to watch closely, as we plan to survey homebuyers again this fall to see if the prevalence of sight-unseen offers continues to change.

“Now that most homes are staying on the market for longer than a week, there just isn’t as much pressure for buyers to make offers so hastily,” said Jessie Culbert, a Redfin agent in Seattle. “That’s a big change from earlier this year when sellers set offer review deadlines, and they were strict! This meant that whether or not you had time to physically step inside the home, you had to get your offer in on time in order to be considered. Otherwise you would miss out entirely on the opportunity to compete for it.”

It’s also worth pointing out that one in five homebuyers making offers sight unseen is still a lot, and we believe this is a reflection of the fact that technology has made it easier to learn about a home from anywhere with internet access. For example, using Redfin 3D Walkthrough, a buyer can tour a home virtually on their computer or smartphone, seeing the walls, appliances and nooks and crannies from every angle. Additionally, Redfin agents use tools like FaceTime, Skype or YouTube to show homes to customers who aren’t able to join them for an in-person tour. This technology is especially useful to homebuyers moving to a new city, who would have to drive for hours or take a flight to see a home. Over time, as technologies continue to advance and people become more comfortable relying on them to make big financial decisions, we expect sight-unseen offers to become more commonplace, even throughout fluctuations in supply and demand.

Redfin contracted SurveyGizmo to field a study between May 1 and 18, 2018 of 4,264 people from the general population who indicated they had bought or sold a home in the past year, tried to buy or sell a home in the past year or plan to do so this year. This report focused on responses from the 4,264 people who indicated they bought a home in the previous 12 months. The survey targeted 14 major metro areas (Austin, Baltimore, Boston, Chicago, Dallas-Fort Worth, Denver, Los Angeles, Phoenix, Portland, Sacramento, San Diego, San Francisco, Seattle and Washington, D.C.).
Comparisons were made using results from similarly commissioned surveys conducted by SurveyGizmo in May and November 2017.

For more information about the survey and its findings, contact Redfin Journalist Services at press@redfin.com.

The post 20% of Recent Homebuyers Made an Offer Sight-Unseen, Down from 35% Late Last Year appeared first on Redfin Real-Time. 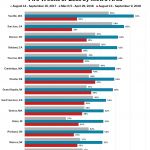