Homebuyer demand for condos dropped with the coronavirus pandemic, but buyers are starting to return—particularly those searching for affordable homes. Demand for single-family homes has recovered more quickly.

Condo sale prices nationwide dropped 1.4% year over year to a median of $252,000 in June, the second consecutive month of drops after nearly two years of rising prices. Price growth for condos had reached a three-year high in January with a 9.7% year-over-year increase.

Contrast that with single-family homes, which saw their median sale price rise 2.6% year over year to $322,000 in June. Price growth for both condos (-2.4%) and single-family homes (+0.3%) bottomed out in May after the pandemic slowed housing activity to a near halt. 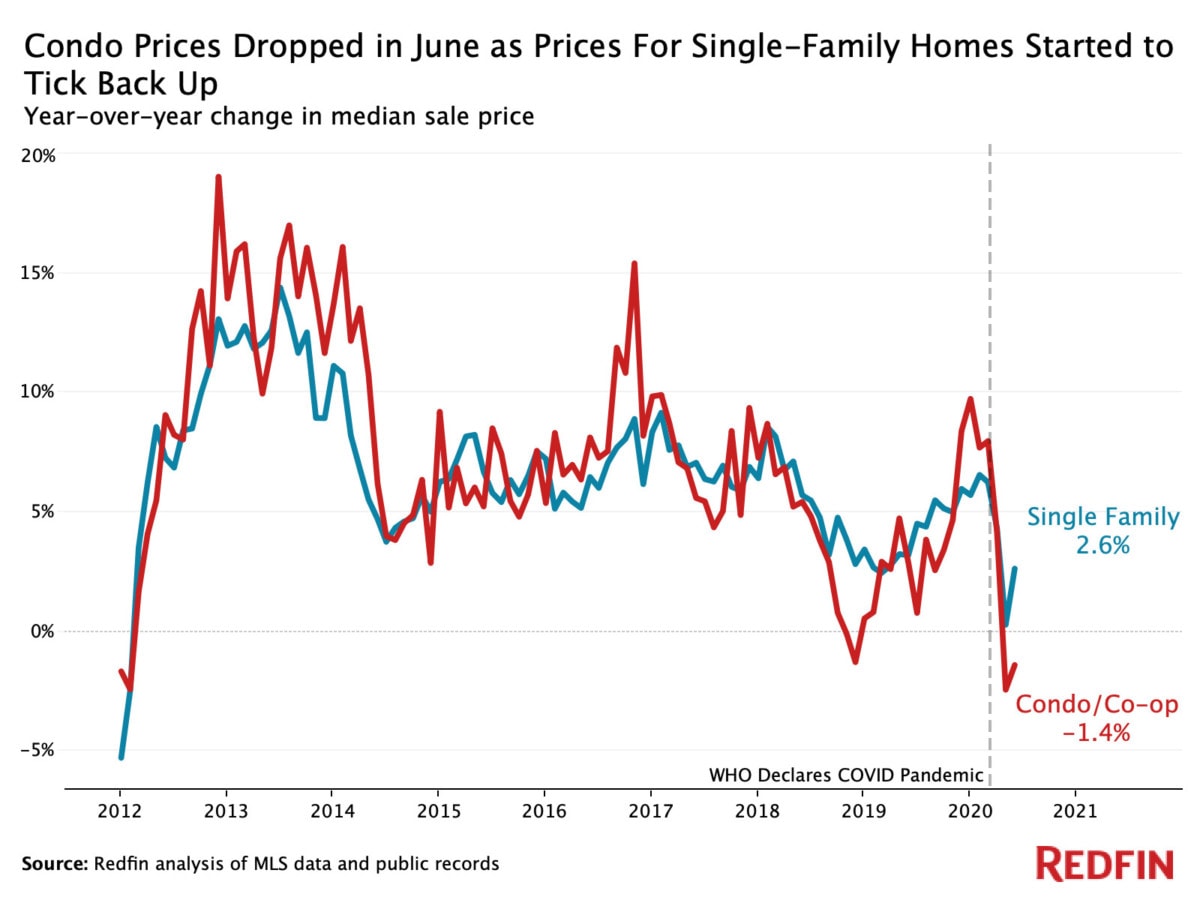 “The pandemic has fundamentally changed what a lot of buyers are looking for in a home,” said Redfin economist Taylor Marr. “People are spending more time at home and less time at the office or school, and that means buyers want more space and private yards. And because of concerns about the virus, they aren’t as interested in shared amenities like elevators, community pools and gyms, which have traditionally been benefits of condo living. But condos tend to be more affordable than single-family homes, especially now with historically low mortgage rates and the fact that condo prices are down from last year while they’re up for single-family homes. Those factors are motivating some buyers to jump back into the condo market, particularly those who have found that purchasing a condo is just as affordable as renting an apartment.”

Condo sales were down in June, but pending sales indicate buyers are coming back

Condo sales fell 31.3% year over year in June on a seasonally adjusted basis, following a 53.5% drop in May when sales growth bottomed out. Single-family home sales are experiencing smaller drops, with an 11.9% year-over-year decline in June after a 27.6% drop at their low point in May. 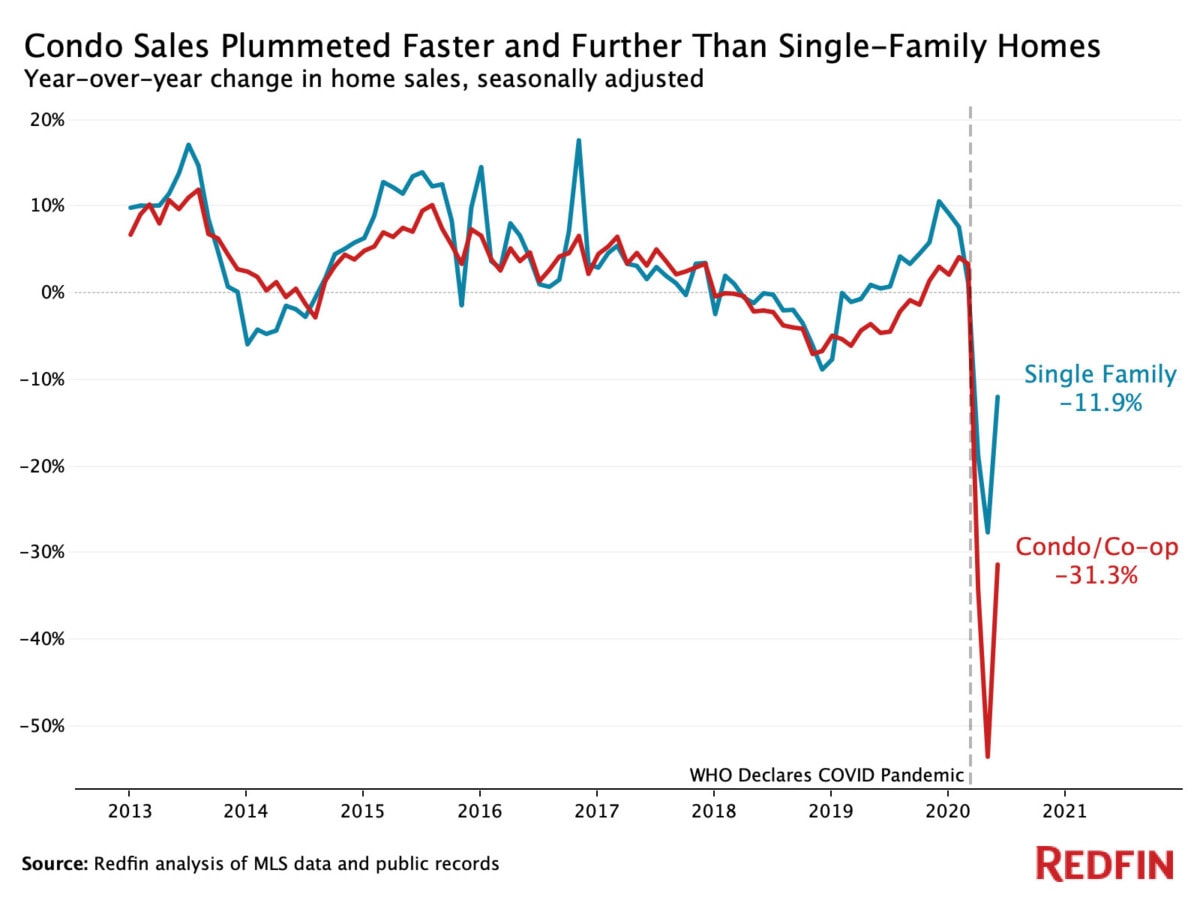 Pending condo sales were down 4% year over year on a seasonally adjusted basis in June, an uptick from the 46.1% drop when growth bottomed out in April. The recovery in pending sales indicates that demand for condos is returning, albeit less so than for single-family homes, which posted a 6.1% year-over-year increase in June, up from a 28.3% decline at their low point in April.

Condo supply recovered to near pre-pandemic levels, but it’s still down compared with last year

“Right now we have a mixed bag of buyers. Condo buyers are more hesitant and taking longer to make decisions than people who are looking at single-family homes,” said San Francisco Redfin agent Carlos Barrientos. “People who want a condo are less confident that the space will be comfortable to live and work long-term, and they’re worried about the investment. The people who are going through with condo purchases are doing it because that’s what they can afford.” 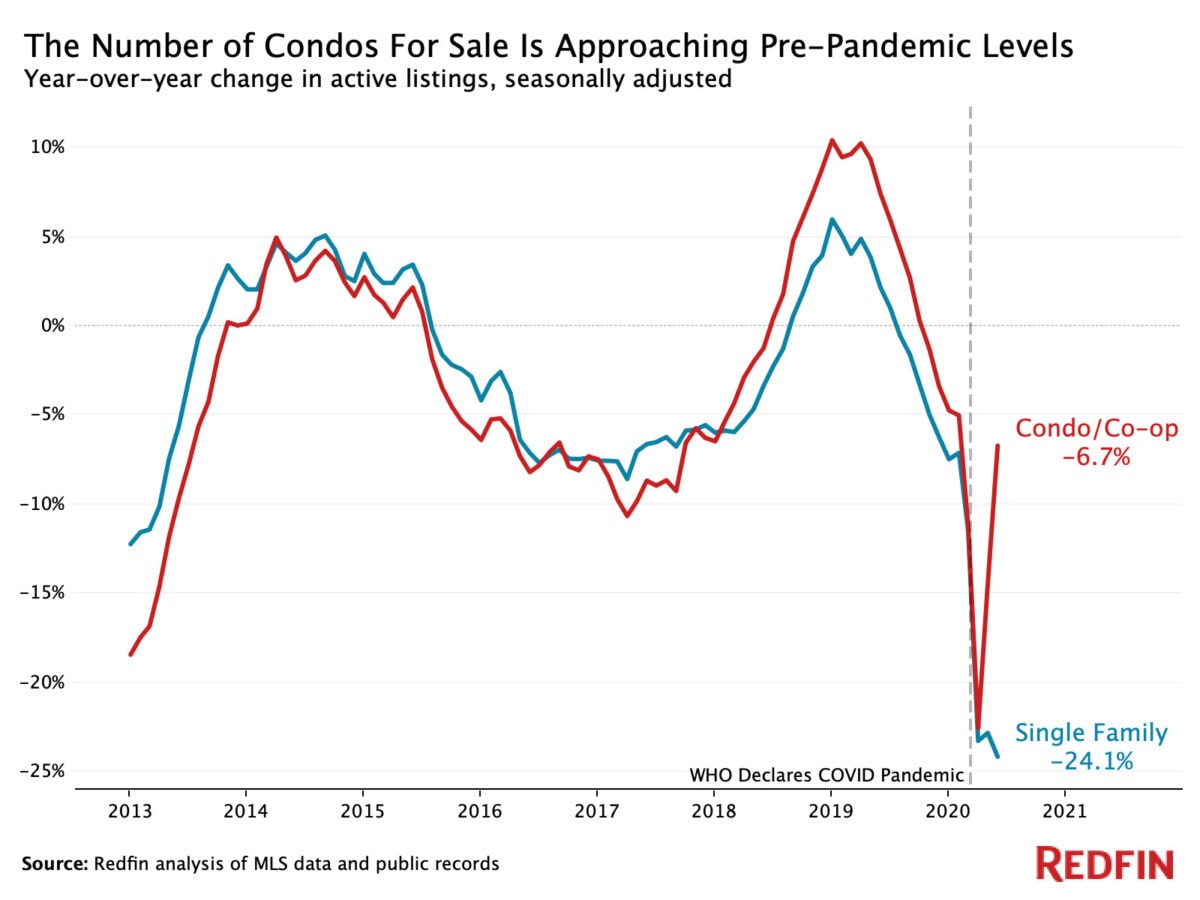 Just over 40% of Redfin offers for condos faced competition in June, while more than 56% of single-family homes were part of bidding wars.

“Condos aren’t flying off the shelves like single-family homes, but I’ve helped buyers with several recent condo deals,” said Tony Orlando, a Redfin agent in Detroit. “Because condos tend to be more affordable, they still appeal to people looking for less expensive homes and they’re often attractive to first-time homebuyers, people who live alone and buyers looking to downsize and have a maintenance-free lifestyle.”

To be included in the metro-level section, metro areas must have a population of at least 1.5 million and at least 100 condo sales in June. The New York metro area was excluded from this analysis due to limited data availability.

Below are market-by-market breakdowns for prices, inventory, new listings and sales for markets with at least 100 condo sales in June. For downloadable data on all of the markets Redfin tracks, visit the Redfin Data Center.

The post Condo Prices Down 1.4% in June, Sales Down 31%, But Demand Is Ticking Up appeared first on Redfin | Real Estate Tips for Home Buying, Selling & More.