Inventory declines continued to moderate in August. The number of homes for sale was down 3.4 percent year over year, the smallest decline in 29 months. The number of homes that were newly put on the market in August grew 3.3 percent year over year, helping to ease the supply shortage. The typical home that sold in August went under contract in a median of 37 days, three days faster than August 2017.

While homes are still selling at a rapid clip, other data points to waning competition. The share of homes that sold above asking price declined from 25 percent last August to 23.6 percent this August.

Nearly 30 percent of homes on the market in August had a price drop, the largest share on record since Redfin began tracking this metric in 2009, and a 3.4 percentage-point increase over last August. It’s worth noting that the share of homes with price drops typically peaks each year in July or August.

Redfin has been closely tracking a market shift in San Jose, California, Seattle, and Portland, Oregon, over the past three months. The trends of increasing inventory and declining sales we reported in June and July intensified in August.

In San Jose and Seattle, the supply of homes was up nearly 50 percent year over year. In Portland, inventory increased 25 percent. The increase in inventory is the combination of more people putting their homes on the market as fewer buyers are stepping up to purchase. San Jose, Seattle and Portland saw respective sales declines of 16 percent, 19 percent and 6 percent.

Rebecca Walter, a Redfin agent in Portland, says the market shift has been dramatic. She is seeing far fewer multiple offer situations lately compared to last year, even in popular neighborhoods. Walter says in this market, pricing right is more important than ever.

“I tell sellers that the worst thing you can do is overprice your home. If you have to drop the price, you can’t recreate the same excitement and fervor as when your home first hits the market. Pricing too high can ultimately result in getting less than market value, below what you likely could have gotten if you priced at market value from the start.”

Walter says rapid price appreciation has left many would-be Portland buyers priced out of the market and some are opting to move somewhere more affordable . She says homeowners who are thinking about selling should consider doing so sooner rather than later.

“I don’t have a crystal ball, but I wouldn’t count on your home appreciating and being worth more in the spring than it is now. The Fed has indicated they will make one more rate hike in December, which would impact buyers’ purchasing power. We have this window before the market slows for the holidays, so the sooner the better if you’re planning to sell.” 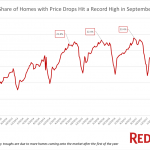