The Redfin Housing Demand Index has remained roughly unchanged for the past four months, inching up 0.3 percent from July to 125.2 in August, as an increase in price drops and softening demand in previously hot markets point to an environment enabling homebuyers to be more choosy. The number of people requesting home tours rose 3.4 percent month over month, while the number of buyers making offers remained roughly flat.

In the interactive chart below, use the dropdown menu in the upper righthand corner to display and download national and metro-level data.

The Redfin Housing Demand Index is based on thousands of Redfin customers requesting home tours and writing offers in 15 major metro areas in the U.S. The Demand Index is adjusted for Redfin’s market share growth and for seasonality. A level of 100 represents the level of homebuyer demand posted in January 2014. You can learn more about the methodology behind the Redfin Housing Demand Index and the data sources we use to measure housing activity prior to purchase. The Demand Index methodology was revised in July to improve the way it accounts for seasonality.

“The housing market is past the heydays of spring and early summer, when most homes received multiple offers from buyers desperate to get a home under contract,” said Taylor Marr, Redfin senior economist. “Several factors are contributing to stalling demand. Tax reform and higher home prices are causing homebuyers to be more careful about their decision-making. Meanwhile buyers on the West Coast are finding that a growing supply of homes can work in their favor, enabling them to be more selective and make less aggressive offers. While overall demand still remains strong, easing inventory pressure is allowing home buyers to be more careful in their purchases.”

Several metro areas posted month-over-month increases in the Demand Index, including San Francisco (4.4%), Chicago (3.1%), and Atlanta (1.7%). But those gains were moderated by declines in Orange County (-10.8%), and others. 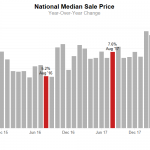 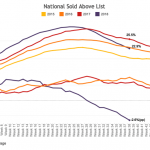