In a monthly survey of REALTORS®, respondents are asked “Compared to the same month last year, how would you rate the past month’s traffic in neighborhood(s) or area(s) where you make most of your sales?” Respondents rate buyer traffic as “Stronger” (100), “Stable” (50), or “Weaker” (0) and the responses are compiled into a diffusion index. An index greater than 50 means that more respondents reported “stronger” than “weaker” conditions.
The chart below shows buyer traffic conditions in September–November 2017 compared to conditions one year ago. Based on the responses reported in the November 2017 REALTORS® Confidence Index Survey, buyer conditions in many states were “stable” to “very strong”, except in North Dakota, South Dakota, Alaska, Louisiana, and West Virginia.[1] Respondents from Florida, which was battered by hurricane Irma, generally reported “strong” buying activity compared to one year ago. Meanwhile, in Texas, which was hit by Hurricane Harvey, buying activity was generally “stable” compared to buying activity one year ago.

Meanwhile, supply conditions in September–November 2017 compared to supply conditions one year ago were mostly “weak” to “stable” (or unchanged) in many states. Many states which have “strong” buyer traffic, such as Washington, Minnesota, Wisconsin, Indiana, Missouri, Kansas, New York, Massachusetts, Pennsylvania, Kentucky, North Carolina, and New Mexico are facing “weak” seller traffic conditions.

Nationally, the REALTORS® Buyer Traffic Index (62) indicates that buyer demand is stronger compared to conditions in the same month last year. Meanwhile, supply remained generally tight, with the REALTORS® Seller Traffic Index remaining below 50 (45). An index above 50 indicates that more respondents reported stronger than weaker conditions compared to one year ago.
A strong buyer’s market has bolstered home prices. At the end of November 2017, the inventory of existing homes stood at 1.67 million, equivalent to 3.4 months of the current monthly sales pace, which is below the level of six months that has historically been associated with a balanced market. 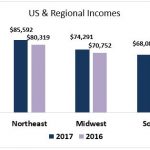 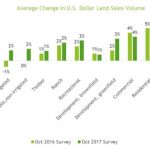