The dollar volume of U.S. land sales rose at a stronger pace of 4% percent in the months of October 2016‒September 2017 compared to levels in the prior 12-month period[1], according to respondents in the 2017 Land Market Survey (Press Release), a joint undertaking of the REALTORS® Land Institute and the National Association of REALTORS®.
Dollar Land Sales Volume.  The 4% growth in dollar sales in the October 2017 survey represents a pickup from the 2% sales growth in the October 2016 survey.[2] Sales for all types of land increased, with residential and commercial land sales as the major growth drivers.
Residential land sales rose 5%, and commercial land sales increased 4%. The demand for residential land rose amid the continued recovery of the housing market: existing home sales rose to an annual pace of 5.48 million in November 2017, while the number of building permits rose to an annual pace of about 1.3 million building permits in December 2017.
Sales of agricultural irrigated and non-irrigated land each rose by 2%, a turnaround from the sales decline respondents reported in the October 2016 survey. Agricultural land sales rebounded as commodity prices for livestock, cattle, and grains stabilized after collapsing in 2012-2016.

Land Prices. The increase in dollar sales volume appears to be mostly driven by higher prices, rather than transactions volume.  On average, U.S. land prices (in dollars per acre) rose at a faster pace of 3% from September 2016 to September 2017 (up from 1% in the October 2016 survey[3]).
Prices rose across all land types, led by residential land at 5% and commercial and greenfield development land at 4%.
The price per acre of agricultural irrigated land sold rose 2%, while the price of agricultural non-irrigated land sold rose 1%. Agricultural land prices rose as prices for cattle and livestock slightly improved, while prices of grains remained flat, after years of decline in 2012-2016

Outlook for October 2017-September 2018. Respondents expect an increase in the dollar volume of land sales for all types of land, with the strongest pace in residential and recreational land sales, both expected to grow by 4% growth during this period.

Financing and Zoning Were Major Issues Affecting Land Transactions. Among the respondents, obtaining land financing was major issue, cited by 39% of respondents. Among respondents, 42% reported that zoning regulations have tightened in the past five years, with higher fraction of respondents reporting tighter regulation in the Northeast, Midwest, and the West states: RLI  Region 1 (67%), Region 2 (50%)the , Region 3 (59%), Region 4 (47%), and Region 5 (57%). 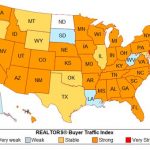 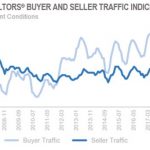