Redfin will publish its Demand Index on the last Tuesday of each month at 8 a.m. Eastern time.  The Demand Index will use available information at the time it’s run (the middle of the following month), but due to the smaller sample sizes and variable reporting times from different Metros, the latest Demand Index value for each Metro may be revised on the subsequent release.

Redfin is the only U.S. real estate brokerage that can track every tour and offer at scale because its agents are employees of the company who all use the same technology platform to track their work and client activity.

Tours are weighted by averaging the number of tours per written offer. The index adjusts for Redfin market share growth by taking the raw number of tours and offers in a given month and dividing by an exponentially weighted sum of Redfin’s share of sales over the prior six months. Sales activity outside of the portions of the market in which Redfin operates are accounted for by assuming demand follows a lognormal distribution with respect to price. The undersampled parts of the distribution are filled in using Redfin’s offer and tour information from the well sampled portions, and utilizing a maximum likelihood estimation approach to calculate the parameters of the whole lognormal distribution. This allows us to calculate the shape of the entire demand distribution using our available tour and offer data. Finally, we employ a statistical technique to estimate and remove statistical noise and the predictable seasonal patterns in the data to arrive at a seasonally-adjusted demand series.

Redfin (www.redfin.com) is the next-generation real estate brokerage, combining its own full-service agents with modern technology to redefine real estate in the consumer’s favor. Founded by software engineers, Redfin has the country’s #1 brokerage website and offers a host of online tools to consumers, including the Redfin Estimate, the automated home-value estimate with the industry’s lowest published error rate for listed homes. Homebuyers and sellers enjoy a full-service, technology-powered experience from Redfin real estate agents, while saving thousands in commissions. Redfin serves more than 80 major metro areas across the U.S. The company has closed more than $60 billion in home sales. 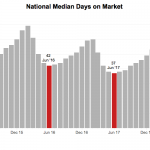