Redfin Survey: 36% of Millennial Homebuyers Took a Second Job to Save for Down Payment; 10% Sold Cryptocurrency

In March, Redfin commissioned a survey of 2,000 U.S. residents who planned to buy or sell a primary residence in the next 12 months. The purpose of the survey was to better understand the objectives, perspectives and concerns of those about to enter the real estate market. We focus this report on the more than 500 respondents between the ages of 24 and 38 who said they planned to buy their first home home in the coming year.

The top concern among these first-time millennial homebuyers was having enough money for a down payment, with 50 percent citing that response, followed by affording a home in their preferred location (45%) and rising home prices (41%).

Aside from the 69 percent who saved directly from paychecks, millennials used several tactics and sources to accumulate the money needed for a down payment on their first home. Thirty-six percent used earnings from a second job, 13 percent pulled money out of retirement funds early and 10 percent sold cryptocurrency. Some were lucky enough to have received a cash gift from their family (24%) or an inheritance (12%).

When broken down by household income levels, there were some notable differences in how millennials achieved a down payment. Millennials in households earning more than $100,000 per year were less likely than those earning less to have saved directly from paychecks, with 60 percent of high-earners having done so, compared with 75 percent of those who earn less than $100,000. Millennial households earning more than $100,000 were more than three times more likely than their less-well-off peers to have sold cryptocurrency investments and twice as likely to have sold stock investments. They were also more likely to have received an inheritance or cash gift from family or to have dipped into their retirement savings.

“For millennials who have launched their careers while working to pay off student loans in the last decade, having enough to set aside toward a down payment would have been a significant accomplishment,” said Sheharyar Bokhari, senior economist at Redfin. “These results reveal some of the inequalities that have been exacerbated in the years following the recession, with the well-off having more flexibility and thereby ability to become homeowners and build more wealth, through advantages like financial support from family and the opportunity to invest in the stock market.”

To afford a mortgage, 65 percent of millennials who intend to buy their first home this year plan to take some action, aside from just paying from their regular paychecks:

Again, there were some surprises in the responses when broken down by income. Lower-income millennials were more likely than those earning more than $100,000 per year to say they planned to pursue additional employment to cover their mortgage. Those with higher incomes were more than three times as likely to get a roommate they don’t know. High-earners were also more likely to say they will split ownership with friends or drive for a ride-sharing service.

The post Redfin Survey: 36% of Millennial Homebuyers Took a Second Job to Save for Down Payment; 10% Sold Cryptocurrency appeared first on Redfin Real-Time. 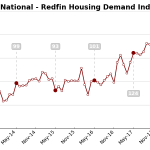 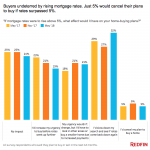