Since 2012, Broad Home-Equity Gains Across Minority and White Neighborhoods

Minority Neighborhoods Had the Largest Percentage Gains in Home Equity

But Starting with More Equity, White Neighborhoods Had the Largest Absolute-Dollar Gains

“Home prices over the last six years rose most steeply in minority communities, and unlike in past booms when Americans just borrowed more and more money, these price gains led to real increases in wealth for homeowners of color,” said Redfin CEO Glenn Kelman. “But even though homeowners in mostly minority communities had the largest percentage gains in home equity, it was the folks living in mostly white neighborhoods who had the largest dollar gains, just because they had so much more home equity at the beginning of the recovery. This just goes to show that, even as a strong market broadly benefits homeowners, it’s still very hard for people starting with less money ever to catch up. On an absolute-dollar basis, homeowners in minority communities became wealthier, but still fell further behind.”

Our analysis is based on data on home values in white, minority, and mixed-race zip codes in the 16 most populous metropolitan areas for which Redfin tracks historical home-sale price data. To measure home equity, we used the Redfin Estimate, the automated home-value estimate with the industry’s lowest published error rate for listed homes, as well as loan information from county records. We considered a zip code “white” if less than 25 percent of its households were not white, according to Census data as of 2016. We called a zip code a “minority” community if more than 50 percent of its households were African American, non-white Hispanic or Asian. We defined a community as “mixed-race” if between 25 and 50 percent of its households were not white. It’s worth noting that the data we analyzed does not account for people who lived in but never owned homes in these communities. As home prices appreciated faster than wages, it’s likely that many people became less able to buy homes in their neighborhoods, and have thereby been excluded from the wealth gains afforded by home-equity growth in the past six years.

See the table below for local data on home equity and appreciation. Highlights include:

Home equity is just one measure of wealth, but we chose to study it because it is so closely tied to the recent housing market recovery, and it has historically been Americans’ main financial asset. But a home represents much more than the wealth it creates. Where one lives determines her access to resources like high-quality education and opportunity like well-paying jobs. We at Redfin seek to use this research to better understand our role as advocates for homebuyers and sellers of all backgrounds in helping to create a more integrated, and thereby more equal society.

For this study, we looked at county sale records for homes purchased at anytime during 2012. After cleaning the data, we had a sample of roughly 962,000 sales. Assuming those homeowners are still living in the same house and that they all took out the prevailing 30-year fixed mortgage rate at the time of purchase, we were able to calculate the outstanding loan balance in August 2018 using the total original value of loans (first and second), the 30-yr fixed monthly average mortgage rate from Freddie Mac in the month of sale and the total number of monthly payments made thus far. We assumed that none of the homeowners paid down their mortgage and that none borrowed against their home equity. The August 2018 Redfin Estimate was used as a proxy for the current market value of these homes. Home equity in 2018 is then obtained by subtracting the outstanding mortgage balance from the current market value of the home. Home equity in 2012 is simply the difference between the purchase value of the home and the original loan balance. We classified a zip code as minority, mixed or white based on the shares of white and non-white households over the five year period including 2012 through 2016, according to household race data from the 5-year American Community Survey. Since the sale records are linked to zip codes, we are able to track home equity changes in minority, white and mixed-race zip codes, as defined above. Of the roughly 2,300 zip codes, minority and white each made up 36 percent, while the remaining 28 percent were considered mixed-race.

The post Since 2012, Broad Home-Equity Gains Across Minority and White Neighborhoods appeared first on Redfin Real-Time. 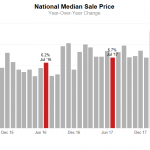