The Mid-Century Modern House Style: An Icon of Function and Simplicity 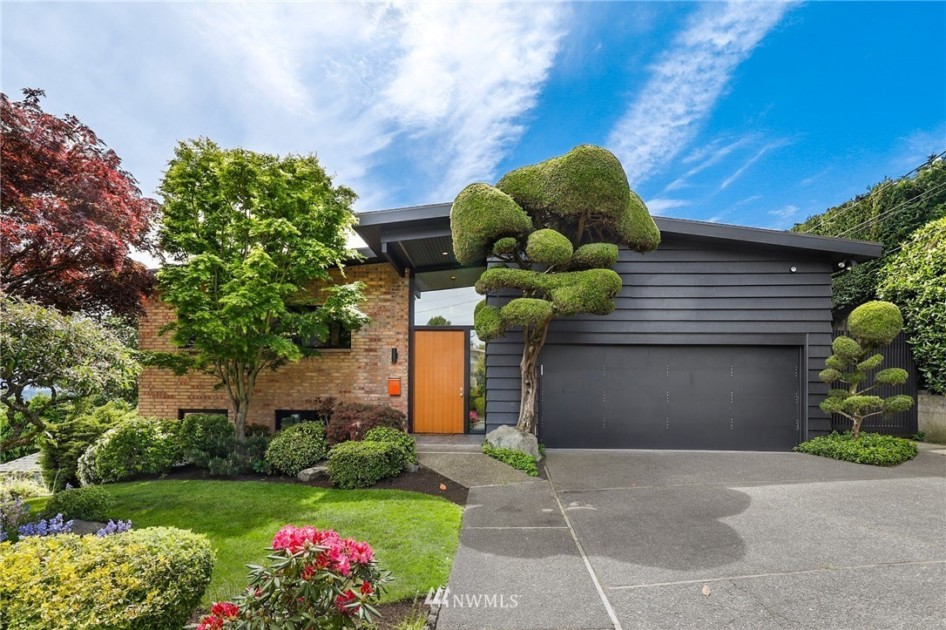 After World War II, the Mid-Century Modern house style appeared in the U.S. to support the increased demand for suburban homes. At this point, Americans prioritized lifestyle, family, and spending time in nature, all things reflected in the Mid-Century Modern style through open living spaces, large windows, and functional spaces.

“Today, Mid-Century Modern isn’t only a popular style itself, but has also inspired today’s modern design trends,” shares Safdie Rabines Architecture, an architect firm in San Diego, CA.  “Keeping the simple, clean lines, using a minimalist pallet of materials, maximizing the use of open space, and blurring the lines between the interior and the garden are the hallmarks of Mid-Century Modern architecture. Great rooms, popular in new construction or remodels, draw their inspiration from the open floorplans of Mid-Century Modern homes.”

Where can you find Mid-Century Modern homes?

What is a Mid-Century Modern house?

During its initial boom from 1945 to 1969, Mid-Century Modern architecture was divided into three distinct styles:

This version is inspired by international architects and heavily influenced by the Bauhaus movement. Homes are simple, with little to no decoration, and typically finished with stucco. Other characteristics of the international style include rectangular structures, large windows, and open interiors. Materials often include steel, concrete, and glass.

Like the international style, contemporary Mid-Century Modern houses feature clean lines and floor-to-ceiling windows. These homes incorporate more natural and organic materials like wood, stone, and brick, and typically have asymmetrical exteriors with windows extending to the roofline and exposed ceilings and beams in the interior.

The organic style emphasizes blending indoor-outdoor living to embrace their natural surroundings. Compared to its counterparts featuring sharp lines and right angles, this style uses more natural shapes. Because of this, an organic Mid-Century Modern home in the desert will have an entirely different look and feel than one in the forest. 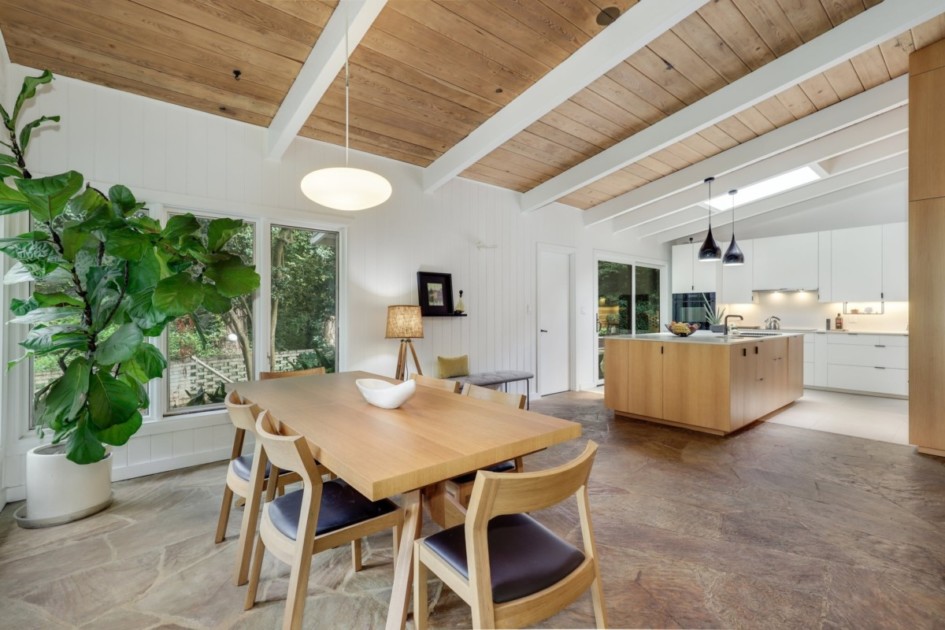 Defining features and characteristics of a Mid-Century Modern house:

Too much furniture and decor can make a room feel overcrowded and cluttered, while too little can make a space feel empty and drab. Mid-Century Modern homes make the most of the space by maximizing the room’s function.

Simple furnishings with clean lines and a muted color palette complement the simple exterior of a Mid-Century Modern home. You’ll often see the use of large statement pieces, like sculptures or plants rather than small trinkets or collections, and furniture is kept simple with sleek lines with wooden or metal pin-style legs. The boxy and minimalistic exterior of the Mid-Century Modern home tends to be monochromatic and neutral, with earth tones using brick or wood-paneled siding.

Connecting with nature is paramount. To encourage this, rooms will often have multiple outdoor views and access points to nature, large floor-to-ceiling windows, or sliding doors to allow natural light to enter and encourage a sense of harmony with the outdoor spaces. You’ll also see a connection to nature in other forms, such as the use of raw materials and houseplants as decoration.

Flat planes and clean lines are hallmarks of this house style, with the roofline considered one of the most iconic features of the Mid-Century Modern home. To add character to a room, you’ll often see furniture, rugs, window treatments, and artwork with geometric patterns resembling starbursts, atomic, and boomerang features.

Typically, a Mid-Century Modern house is single-story or split-level with short staircases – even just a few steps – leading up and down between rooms. Partial walls, centered fireplaces, and cabinetry also add depth and variation in elevation. 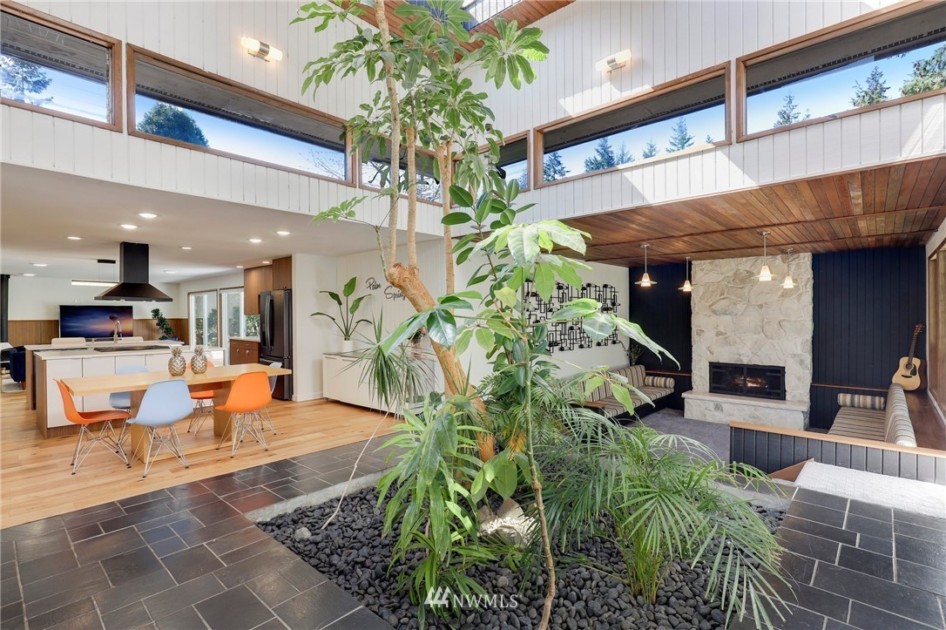 Focus on form, function, and flow

“Form, function, and flow are the key principles to employ when designing and furnishing a Mid-Century Modern home,” shares Tommy Lei, Founder and Principal Styleteller at MYBELONGING. “It’s all about creating a nice sense of flow and visual movement for the eyes. The Noguchi coffee table is a great focal point in any lounge or living room, paired with a laid-back Herman Miller Eames lounge chair. I love to accentuate a Mid-Century Modern space further with a delicate yet structural hanging light, akin to a Japanese Akari or George Nelson saucer lamp. And, of course, finish off the space with a gallery wall filled with antique Japanese silkscreen paintings and Joan Miro artwork.”

“Mid-Century Modern allows homeowners to mix materials, textures, colors, and forms in new ways that respond to a range of aesthetics today,” adds Machine Age, an expert in Mid-Century Modern furniture from Europe and the Americas. “Classic, clean-lined Mid-Century pieces can inject freshness into traditional interiors. At the same time, the plusher organic forms can make a minimalist space inviting.”

Stay consistent with the style

“If you’re going for the Mid-Century Modern look, don’t randomly buy a few Mid-Century Modern pieces, throw them into your home, and call it a success,” advises Edgar Blazona, founder of BenchMade Modern. “Instead, make sure you start with an updated, modern space and gradually layer in Mid-Century Modern pieces. Focus on clean lines paired with classic, geometric shapes, and open sides. This sleek, functional look is iconic and withstands the test of time.”

“You don’t need to live in a ranch-style house to add Mid-Century furniture to your decor,” says Willi Galloway, the Founder of Perch Furniture, a custom furniture store in Portland, OR. “The great thing about this style is that it has simple, clean lines that mix and match well with more modern or transitional styles. This quality allows Mid-Century furniture to play nice in everything from a Craftsman bungalow to a modern loft. Textured fabrics, button tufting, and round, tapered cone legs are classic design hallmarks of Mid-Century upholstered furniture.”

Don’t be afraid of mixing styles

“Mid-Century Modern design fits in well with other furniture and design styles,” states Kelley Wehman at Carousel Consignment SF. “Mix Mid-Century Modern pieces with some of your favorite family antiques or your already existing clean, contemporary pieces. Don’t be afraid to update authentic Mid-Century chairs or seat cushions with your favorite modern upholstery. It all works well together.”

“You don’t have to “go retro” to benefit from the timeless style of Mid-Century Modern furniture and decor, says Jackie Williams and Todd Wilson, owners of Furnish Me Vintage. “The clean lines of Mid-Century Modern furniture blend seamlessly with many decor themes. This means you can update your look without getting rid of the pieces you love. Add comfort to your living room with a sleek Danish recliner. Elevate your contemporary home furnishings with Mid-Century Modern case goods made of old-growth walnut and teak woods or aged leather. Superior materials and craftsmanship are hard to find in today’s home furnishings. When you buy vintage, you’re making an investment. Vintage furniture is functional art, an asset that you can use and enjoy, much like your home itself.”

How to find Mid-Century Modern homes in your area

If a Mid-Century Modern house fits your style, Redfin can help you find one in your area. It’s as simple as: